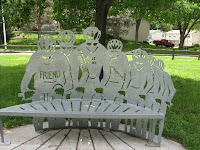 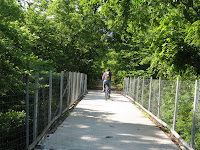 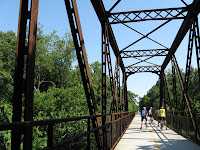 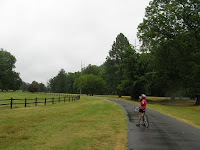 You're never far from the river along this trail that travels along both sides of the waterway that separates North Little Rock from Little Rock. After I started out with views of the old State House and Petit Rouge, the rock that gives the city its name, my trek became a little more exciting than I anticipated because I ended up cycling on the lone day that week when the city was hit by a violent thunder storm with torrential rains. Instead of heading indoors, I continued cycling -- this was the only day I had allotted for this trip so I didn't see an alternative -- until the rain impaired my vision. Once I pulled off to the side of the road, lightning struck a transformer 20 feet away, sending sparks flying in all directions. I immediately got back on the bike but, again, was forced to bail out and, coincidentally, lightning struck a tall tree directly across the road. I finally took shelter with half a dozen other cyclists in a nearby open-air pavilion where we waited it out. Once the storm abated, I continued along the path, passing tall red-tinged bluffs, an old quarry, the lush Emerald Park (a good mountain biking and hiking venues), the massive pedestrian-only Big Dam Bridge, and the spacious Murray Lock & Dam Park with its well-tended and densely forested sections.

Posted by J The Travel Authority at 10:56 PM

Fantastic, I loved reading these about your travels on these four trails. We'll still have to get you out on the "Big Mick" out here in South Dakota. We'll look forward to when we can make it work.

Which was your favorite?

Thanks for mentioning Kansas. I've done the Landon trail several times and it isn't always empty. Looking forward to trying out some of the others you mention.

Hi Katyln, Glad you enjoyed my post. And I look forward to either biking or cross country skiing the "Big Mick" in 2012.

Hi Johanna, It's good to know that the Landon trail is well used, too. Hope you have a chance to check out some of these other rails-to-trails.

We have a very popular rails to trails system in my area, so it's nice to know there are other ones across the country. It sounds like a fun trip!

Haven't biked since I was a kid and had a bike accident that knocked out my two front teeth, but I'd love to get back into biking. Such a wonderful way to get around, especially when you're exploring a new place!

HI NoPotCooking, It's always wonderful to find a rail-to-trail. The Rails to Trails Conservancy has a great website where I can plug in a city and find a trail. What could be better?

Hi Susan, Wow, if that happened to me, I don't know if I'd be in the saddle either.

I'm in awe of your job and the life you lead. Take me with you?! I love love to bicycle. This was fun to read.

Interesting that there's a Keystone Trail in Nebraska - I grew up in Pennsylvania, the Keystone State, so you've inspired me to do a little research into this moniker!

I'd love to travel around by bicycle. Funny that I read this tonight - I was cycling by the beach today, and finished up JUST as a huge thunderstorm hit. That must have been very frightening for you!

Thanks again for this list and detail on this trip. I'm a Kansas native now living in Arkansas, so two of these are of particular interest to me. I see a weekend trip in my future!

Hi Jennifer, I didn't know you were a cyclist. Yeah! Glad you enjoyed the post.

Hi Casey, Yes, that is an interesting point. I wonder what you found out on that?

Hi Sheryl, That storm in Little Rock was, by far, the scariest storm I've ever bicycled through.

Hi Living Large, Sounds like a great idea. If you do decide to do either of those rails-to-trails, let me know. I'd love to hear your thoughts.

I thought of you when I was in Indiana Amish country this past weekend. The person we were staying with mentioned the Heritage Trail, which he said was an old train line that had been turned into a bike trail. Sounds like an amazing way to explore.

HI MyKidsEatSquid, Oh, I would've loved to have biked that trail. I'm in love with rails-to-trails, for sure.

What a great post. I love these converted trails being used once again.

Hi Ruth, Yes, I hate it when something, including old railroad beds, are just dug up and tossed away to make room for another mall.

Near my house in San Rafael a bike trail on an old rail line includes an old train tunnel that's been reopened, connecting two towns on opposite sides of a high mountain. It's made such a change in all of our lives to be able to cycle right through the mountain!

Rails to trails are such a great way to experience an area while staying active. We have many bike paths in Montana's Bitterroot Valley (none are rails to trails). You just made me want to dust off my bike and start pedaling.

Hi Melanie, I totally agree. Having a rail-to-trail in a community is a great way to get people of all ages fit. We often talk about the health in our communities and that kids are becoming more and more overweight because, among other things, they're not exercising. This would be a great way to get kids and their parents out on trails that would be safe and easy to pedal, while enjoying nature.

Hi Donna, I'd love to check out some of those bike trails in the Bitterroot Valley. I'm sure they're lovely.

Glad you finally made it to the middle of the country, where many people never hopw to visit... America is a great place full of hidden gems, the middle is no different.

Hi Steve, Absolutely. Don't know why it took me so long to visit this part of the country. Just very glad I did.