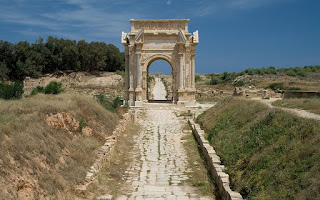 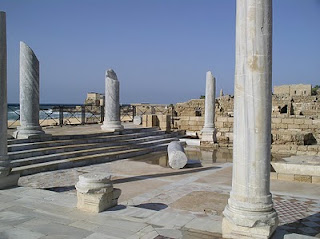 But, what's even more fun is visiting many of these sites when they put on an annual cultural, drama or music festival. I was lucky to visit Merida, Spain when they were hosting their annual summer Merida Classical Theater Festival that's held in the impressive Roman amphitheater. The nightly activities can include films, dance performances, comedy and, of course, classic drama. What could be better than sitting under the stars on a pillow atop the ruins of the top tiers of the amphitheater and listen to a tragedy that was written by Euripides. Certainly a fine way of learning about history.
continue reading "My Favorite Roman Ruins"

The Cyprus You Never Knew

It wasn't until I told a few colleagues that I was headed to Cyprus that I realized even savvy travelers don't know much about this Mediterranean island. After all, their response upon hearing about my upcoming trip was uniformly "I've always wanted to travel to Greece." Curious, considering that, though the Greek culture certainly informs Cyprus, both in terms of the cuisine, the language and other cultural influences, Cyprus is not part of Greece. It's an independent country located just south of Turkey and west of Lebanon and Syria. In addition, if you're heading to Israel, Cyprus makes a great side trip. There are regular cruises from Haifa and frequent one-hour flights from Tel Aviv.

Here's what else you're missing if you haven't visited this petite-sized country that's not even as big as Connecticut.

1. Aside from Israel, I've never found a country with more plump, juicy citrus fruits than in Cyprus. No matter where we drove on the island, I found trees loaded with grapefruits, lemons, oranges and tangerines. Cyprus grows a surprisingly wide array of fruits (and vegetables), from kiwi and cherries to strawberries, bananas and quince. And, no matter where I dined, the fruits were always sweet.

2. I was under a misconception that, since Cyprus is surrounded by the Mediterranean, the meals would be mostly fish centered. In fact, Cypriots eat a lot of meat. It seems that's because the waters have been over fished, making fish quite expensive. But the meats are a real treat, including succulent lamb dishes, seasoned ground pork that's formed into a oval-shaped meatballs, and ribs that are marinated in red wine and then grilled. At lunch and dinner, your best bet is to order the meze which means you'll be eating sometimes a dozen small dishes. The desserts may be the most interesting because the Cypriots love to serve candied fruits in a heavy sugary syrup. Watermelon rind and bitter orange were my two favorite candied fruits, both having a perfume-like aromatic flavor. Some of our meals concluded with a grappa-like beverage called zivania. This is such a powerful drink that some of the locals use it to clean windows! 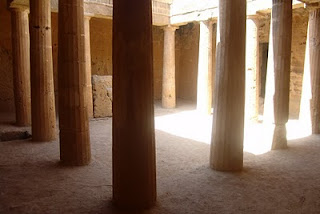 3. When you've visited one graveyard you've visited them all, but not in Cyprus. We inspected the Tombs of the Kings, named because the tombs were so grand yet kings were not buried here. Rather, it was most likely rich aristocrats. Dating to the 4th century BC, these tombs are unique because they were designed to look like houses, complete with open air courtyards surrounded by massive columns and Doric capitols. The best preserved were tombs #3 and #4 where I found massive cave-like structures where several stone coffins would have been positioned.

4. Ancient people in Cyprus have long worshiped the fertility goddess. Later, she became identified with Aphrodite, the goddess of love and fertility. So it's not surprising that a temple to Aphrodite was found in Cyprus. (You can visit the remains of the ruins) as well as the Baths of Aphrodite, a pool fed by a natural spring, where, as legend has it, Adonis first saw Aphrodite as she bathed in the waters. It's said if you drink from the spring you'll feel younger. (But the water really isn't for drinking.) Probably the most visited Aphrodite site, though, is along the coast. It's a giant rock in the sea marking the site where Aphrodite was allegedly born. Today locals say anyone who swims around the rock seven times will have eternal youth or eternal love. Lovers also tie white fabric to brush in the area hoping their wishes will come true. But the tides can be quite rough in this area so swimming at all let alone seven times might actually be dangerous. (I'd opt for just tying the fabric and skip the swim. But the spot with its pebbly beach does make a nice picnic spot. 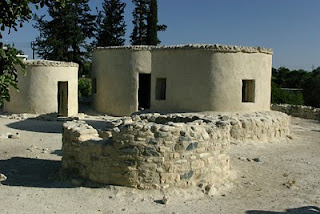 5. Choirokoitia is a must visit for archeology buffs. Here you'll find ruins of the earliest settlement in Cyprus, dating to 6,800 BC. This UNESCO World Heritage site has replicas of the round, flat-roofed stone huts where these ancient people once lived. You can see where they buried their dead in a pit in the floor of each dwelling -- the dead were buried with a stone on their chest, maybe because they feared that they could rise again. After inspecting these replicas, then hike around the expansive site with the actual ruins that also that this village was sophisticated enough to have a security wall with a gate.

6. I'm a big fan of castles and I wasn't disappointed in Cyprus. My favorite was the Kolossi Castle where the basement was used to store sugar in the Middle Ages. (Yes, hard to believe, but sugar cane was a big industry.) It's here where the Knights of the Order of St. John of Jerusalem (referred to as the Commanderie) first produced the traditional Cypriot wine referred to as Kommandaria. (Kommandaria is the oldest wine in the world. And you can taste this sweet red dessert wine at some of the vineyards on the island. Only 14 produce Kommandaria.) Don't miss walking up the narrow steep spiral stone staircase to the top for panoramic views. On the way up you'll see the spacious private quarters of the head of the order.


7. If you love grand theaters, then Kourion is a must see. This city, that originated in the 12th/13th century, includes a massive Greco-Roman theater that was the site of Greek comedy and tragedy as well as Roman mime performances. Now, every July, you can sit in the stands overlooking the azure Bay of Episkopi and the verdant farmland and watch performances during the Ancient Greek Drama Festival. 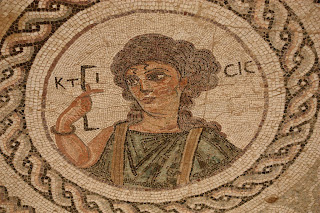 8. I adore archeological digs and Cyprus is loaded with them, especially in Paphos in the southwest. In fact, the whole town is a UNESCO World Heritage site. On a hilltop locale are the remains of the houses and villas of the wealthy who decorated their floors with elaborate mosaics. Some of the most impressive, colorful mosaics are in the House of Dionysos, named for the mosaic of the god of wine and theater found here. Interestingly, it was a farmer accidentally who first discovered one of the mosaics in his field in the 1960s. If you have a guide, you'll be treated to an array of soap opera-like stories as you observe the mosaics telling the tales of Narcissus gazing at his image in the lake, Apollo falling for Daphne who rejects him, and Pyramos who kills himself when he erroneously thinks Thisbe was devoured by a lion. (She then kills herself when she finds his body.)

9. If you're a nature and adventure lover like me, then you have to stop at the Akamas Peninsula in the Northwest. The landscape reminded me a lot of Ireland with its confection of green-tinged landscape. It's home to many nature trails, including the path along the Avakas Gorge where the walls become quite narrow and shaded. Then you look up to see an enormous boulder stuck between the two sides of the gorge. It was formed millions of years ago and it only requires a short walk with some boulder hopping. When I was on this trail where some of the plant life is identified, I heard wild goats, saw giant reeds that my guide used to make kites for his kids, and found wild asparagus that the locals cook with scrambled eggs and lemons.

Large parts of the Akamas Peninsula are protected, allowing the green and loggerhead turtles to lay their eggs on placid Toxeftra Beach each summer (July-August). It's certainly an adventurer's paradise here. Aside from hiking, there's bird watching, mountain biking, parasailing, scuba diving, horse back riding all in this area. After all of this activity, to wind down, I chose the five-star Anassa Hotel that relies on seawater and algae in their treatments.

Things To Do
continue reading "The Cyprus You Never Knew"

Posted by J The Travel Authority at 2:45 PM 26 comments