Many, including myself, have come under Djerba's spell. Perhaps even Ulysses. After all, this Mediterranean island has long been suffused with mythology. In Homer's Odyssey, Ulysses and his crew were said to have been seduced by the sweet fruit of lotus flowers -- most likely it was a fermented beverage that intoxicated them -- that they had difficulty heading back to their ships. No wonder this isle is sometimes dubbed the "Isle of Forgetfulness." 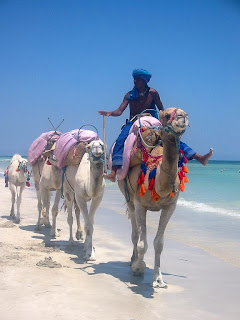 What I found was equally intoxicating from an atmospheric point of view. This petite lush Tunisian oasis that's trimmed with sandy beaches is a perfect place for bicycling: an almost year-round sunny land that's as flat as it can be, aside from a few minor hills. (For those not wanting to work up a sweat, the bus network is extensive or you can rent a scooter or a car.) But, for me, cycling allows for more of an intimacy with the land.

And though there are not the tantalizing lotus flowers -- or whatever fermented fruit they may have consumed -- that are said to have tempted Ulysses and his men, there is the sweet perfume of flowering fruit trees.


The golden swaths of sand is what attracts most everyone who steps on Djerba's shores. In fact, the northeast coast with its clutter of resorts and private beaches sees most of the tourist traffic. Instead, I headed further south towards the causeway where I found more solitude along the sandy stretches. 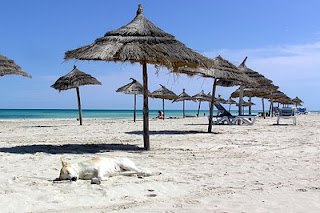 But, a much more magical landscape awaited inland where the scape is dappled with gnarled olive groves and tall date palms. Once I left the sandy coast, I found quiet country lanes where donkey carts rolled by, fields of grazing sheep, and even a young boy herding camels.


Djerba's villages dramatically sparkle in the sunlight, their whitewashed facades in stark contrast to their azure-blue trim and the colorful surrounding fields planted with a cornucopia of fruits, from pomegranates and apricots to mandarins and grapes. Each village displays the island's distinctive white-washed domed buildings. Even the mosques have an unusual architecture, more fortress-like than you might've expected if you're accustomed to the ornate Ottoman embellishments. 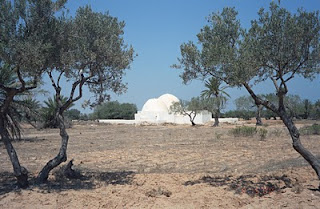 Many of the island's villages are noted for different artisanal goods: whether its hand-woven baskets from Fatou or straw hats from Sedouikech. And Saturday morning brings crowds to El May flocking to their colorful market. For generations, the village of Guellala in the south has been turning out pottery and ceramics that's still made the traditional way, on the potter's wheel, with the clay dug from small quarries just outside of town.


My retreat was the snowy white village of Er Riadh with its network of narrow lanes. There I found the Hotel Dar Dhiafa, a boutique property that's fashioned from centuries-old houses. This is an idyllic place to walk through the tiled courtyards, past pools and niches where bougainvillea are draped and candles cast a warm glow. Plus, they have some of the best cuisine around, North African dishes with French accents.

One of the most surprising findings here is that a Jewish population has called this village home for some 2,000 years. In the modern-day synagogue, El Ghriba, North Africa's oldest, beyond the blue-trimmed white facade is a sun-speckled interior bedecked with ornate mosaics and painted pillars and archways.

Even if Djerba is mostly flat, it's nice to know that weary muscles can easily get some relief. That's because Djerba has become a center for thalassotherapy, spa treatments that revolve around sea water and seaweed treatments that are said to be especially rejuvenating. A firm massage or a soothing wrap could very well be as seductive as the beverage that once captivated Ulysses.


Things To Do
continue reading "Cycling in Djerba, Tunisia"

Posted by J The Travel Authority at 2:24 PM 24 comments Links to this post 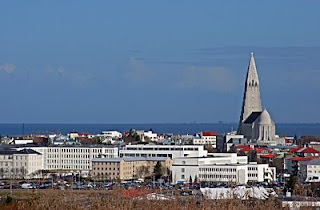 8. And, if you can’t get enough of the water, Reykjavik even has a beach, but, like so much in the city, it’s hardly ordinary. Nautholsvik, a petite half-moon bay that’s easily accessible by bike, bus or cab, is geothermally heated and man made: the sand was trucked in. And if the water isn’t hot enough for you, there are hot tubs located just offshore and on the coast beside the sand so you can bake. Pick a sunny day to visit and you’ll find dozens of Icelanders soaking, lying on the sand, or playing volleyball.
continue reading "My Secret Reykjavik Tips"

Posted by J The Travel Authority at 2:41 PM 7 comments Links to this post

On my recent trip to Cyprus, I blogged about the wealth of treasures that would make me return to this tiny country. Now, Pat Boyle at the Travel Show on KPAM 860 Radio in Portland, Oregon interviewed me on my journey. Listen to this interview and you'll learn why the Cypriots are known for their hospitality, what was my favorite castle, and why mealtime was so special. 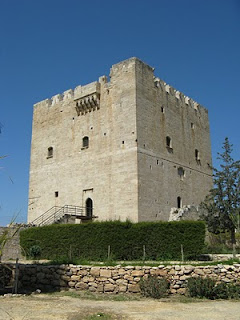 Listen to my interview on Cyprus by clicking on the audio player below:

Posted by J The Travel Authority at 11:49 AM 9 comments Links to this post