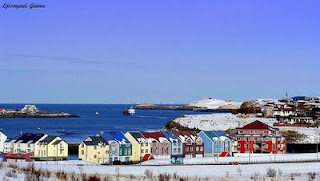 I promised you more on Reykjavik and here it is. 2008 has seen a lot of new, renovated or relocated restaurants, shops and other venues. And, I'm crossing my fingers that, despite the economic crash, they all survive and thrive. Here's what I found on my recent trip:

1. O
The former Siggi Hall restaurant has a new life as O, an upscale restaurant in Hotel Odinsve with chef Eythor Runarsson -- he's on the Icelandic Culinary team -- at the helm. They're serving a menu that's focused on new Nordic cuisine. Among the delicacies on the menu: arctic char with pistachios, and salted cod with sugared cabbage.

2. Lykkjufall
They're not new but they just relocated to a new space. Specializing in unique clothing designed for women who are breast-feeding, the store attracts plenty of women (including myself) who are not breast-feeding yet who clamor for these stylish items.

3. Hemmi & Valdi
Where else can you work on your laptop at 10 p.m. beside people casually drinking a glass of wine, sipping a cappuccino or strumming a guitar while the kids are using crayons to sketch? This is a cosy bar -- though I use the term loosely -- with card games and crayons scattered about and decorated with second-hand furniture that's all for sale. Once I settled in, I didn't want to leave.

4. Emm
Combining a designer clothing store and a cosmetics shop, Emm is oriented to satisfying the needs of the strong, independent women. The fashionable, wearable, trendy items (e-label) all revolve around a sophisticated black color palette, perfect for New Yorkers like myself. Women owned and designed, the store also is home to MM, a cosmetics shop where you can reserve a girl's afternoon of make-up, hair and cocktails.

5. Kryddlegin Hjorta
In my opinion, this new restaurant -- the name is the Icelandic equivalent of the movie title: Like Water for Chocolate -- has one of the best views of the waterfront with the majestic peaks in the distance. Don't expect a menu here. The owner cooks whatever suits her mood at the moment. But it's all great. Everything is organic -- at least it is right now but who knows; that could change with the economic downturn. Lunch is soup, bread and salad but it's something not to miss. I had one of the four soups, the Thai chicken soup with peanuts and chili and, if I had room, I would've had seconds. She also bakes all the thick, healthy breads, like spelt with barley. They only serve dinner on weekends when you also might be treated to drumming night -- her husband is a drummer who has traveled the world.

6. Blue Lagoon Spa
This is not the famous Blue Lagoon not far from the airport. It's a very convenient, new downtown spa with Blue Lagoon treatments. You can soak in a jacuzzi that sits under a small waterfall, sign up for a algae, silica and lava mud scrup or an algae wrap. They also have a very reasonable day-pass so you have full use of the health club. This is a place where you could spend an entire day, or at least the afternoon.

7. Boston Bar
Though the bar isn't new the menu they're serving is. Plus, they now have Bjork's chef, Numi Thomasson, cooking up some simple but tasty options. Only five dishes are served, including citrus garlic herb chicken leg with brown curry rice, and spotted catfish with warm pear and blue cheese sauce. Even if you're not hungry, Boston is one of Reykjavik's loveliest bars, without all the crazy frenzy you see in so many nightspots. (Plus it's also open for lunch.)

8. Aftur
Not new but just expanded its quarters and also it's now open every day of the week. All the clothes are made from recycled clothes and no two are alike. They're all fun and function. I especially coveted the hooded wool capes. Perfect for snowy days in New York when I also need to look fashionable.

9. Kaffi Hljomalind
This non-profit coop just moved to a new location on the main shopping street. It's an amazing social spot considering it's a vegetarian cafe that also houses an art gallery, political library and much more. When I was there, they had a calendar on the wall listing yoga classes, tango lesson, live music performances and independent films. It's another quaint spot to hang out for several hours. The grilled cheese with sundried tomatoes is particularly yummy.

10. Fotografi
This photo gallery and retail shop opened a year ago but the walls are now hung with more of the work of the three owner/photographers. They've got some very avant garde images as well as gorgeous Iceland/Reykjavik-related scenes. If you love anything to do with photography, you must visit this friendly and creative venue. I stopped by twice during one weekend because I felt I missed some treasure. They also host some nice temporary exhibitions in the rear gallery.

Hey. I'm going to Rekjavik in a the 27.05 and was wondering if you could give me the adress of the shop "Aftur". I google'd it and did't find anything..

I'm just back from Israel and will take care of this during the week. Hope that's ok. Thanks for visiting.

Another interesting new store in Reykjavík is Sexy Grandma on Frakkastígur, an Icelandic design store. It´s similar to Lykkjufall, only more art and female clothing and less children stuff.

Hi Anonymous, thanks for the heads up on the Sexy Grandma store. Will check it out.