Cool Goings on in Reykjavik 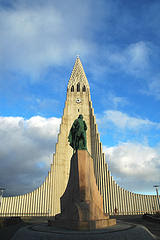 The Icelandic economy may be in the dumps, but on my recent visit I found a slew of new or renovated restaurants, shops and other venues that are worth checking out -- especially considering you'll never find your dollar can buy this much against the sinking kroner. And don't think that a visit to Reykjavik at this time will be a depressing experience given the seriousness of Iceland's financial crisis. Yes, there have been regular protests in front of the Parliament with plenty of egg throwing. But, though they're frustrated, the Iceland people, young and old, seem to be an optimistic lot. As I roamed the capital city, I found many citizens to believe that this crisis is actually a good thing; a sign that they have strayed far from from tradition, and that they needed to go back to the old ways, such as fishing and so forth. Sure, I found boarded up shops along the main shopping streets, but some took advantage of the empty window space to display artists' works. It was easy to get reservations at many of the upscale restaurants and there were abundant sales wherever I looked. Here's one of the restaurants I recommend:

Orange is a restaurant that defines "fun through gastronomy." How else can you explain the coconut crusted prawns arriving aboard helium-filled balloons? Other delicacies hide behind clouds of dry ice. Don't miss the high-octane slushy cocktails in the bar. It's easy to guzzle too much because they look too fruit-punchy to be powerful. I had the "Let's Go Crazy" tasting menu which, like many of the offerings, has a lot of locally-sourced ingredients, including reindeer and grey duck. But expect the unexpected: a soup might be served from a milk carton while a sauce is poured from a ceramic cow. It's all about fine dining mixed with theatrics. After all, the chef, Thorarinn Eggertsson, is on the Icelandic culinary team that did quite well in this year's Culinary Olympics.


Later in the week I'll reveal more of my findings regarding new/renovated/ shops, restaurants, cafes and bars.

Wow! I love the way you write! I am vegetarian but reading this article makes me want a coconut crusted prawn!!! I'm drooling over here.