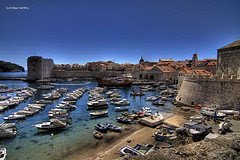 I've got plenty more to tell you about Portugal and Iceland, two of my favorite countries. So expect to see additional postings down the road dealing with my adventures in both places as well as Spain, another one of my specialties. But first, I want to share with you some interesting findings from the five weeks I recently spent in Croatia. This post will deal with the lovely old walled city of Dubrovnik, also a UNESCO World Heritage site. It's on the radar of just about every visitor to Croatia. The cobbled and marble streets and stone stairs are jam packed with tourists. But there are sites that don't see traffic and also ways to avoid the masses.

1. Walking atop the old fortification walls is a must. It gives you an amazing perspective of the city and its many historic features. Get there as soon as it opens up. And pick up the audio guide for all the historic and architectural details. But few people walk the entire more than one-mile length. So expect to find fewer and fewer people as you wander farther along the narrow path. (It's interesting how, the many stairs and the lean size of this walkway doesn't stop people from bringing along baby carriages.)

2. Early in the morning you'll have Fort St. Lawrence all to yourself. Sitting some 120 feet high on rocky cliffs, this massive fort provides scenic views of the sea and the old town. Prowl around the watchtower and examine some cannon ball artifacts.

3. Dubrovnik's old synagogue dates from the 15th century. It's now a museum but it's also a functional synagogue, though services are infrequent. It's still an unexpected venue on a side street and worth checking out. They've got a lot of interesting religious artifacts, including a 13th century Torah.

4. The War Photo Limited Museum definitely flies under the tourist radar. When I visited, they had a photography exhibit of child soldiers from Ramallah, Sierra Leone and other war torn parts of the world.

5. Another little visited but interesting museum is the Rupe Ethnographic Museum that's housed in a 16th century building that once stored grains. You can still see the unique deep dry wells inset in the floor. There's plenty of display, everything from goatskin bags to willow baskets.

6. Buza I and II are two bars that literally sit on the cliff side outside the city's fortifications and literally are entered through a hole in the wall. You can't get a better location, and everyone knows that -- at night both are plenty active. But I stopped by for a quickie breakfast snack and found only one other couple at one of the tables. You could spend hours gazing at the turquoise waters and crashing waves far below.

7. The Museum of Modern Art is outside the city walls and located in a Renaissance-style villa. During my visit, three series Picasso graphics (Suite Vollard, La Tauromaquia and Suite 156) hung on the walls. And the only other visitors were students from a small school group.

8. A quiet walk, first paralleling the sea on the promenade and then past the high stone walls of villas and other properties brings you to the Beach of St. Jacob. You reach it by going behind the little chapel and taking the very steep set of steps. The sandy beach is set at the base of tall cliffs. It's very much a local retreat and very low key with a café and snack bar. Definitely worth walking to.

9. A short ferry ride from Dubrovnik brings you to Lokrum Island, a wooded nature reserve. I only spent a couple of hours but I wish I had at least the entire afternoon. Here, you'll find a botanical garden with plants from all over the world. (Everything is labeled so if you're into botany or gardening, this is a great venue.) A network of trails slices the lush island. One leads to ruins of a 19th century fort where you can climb to the top, and another set of trails leads to an old Benedictine monastery and cloister that's now a café. One of the loveliest parts of the island is beside a salt-water lake that sits in a rocky quarry. A great place to swim or just hang out.

Posted by J The Travel Authority at 4:22 PM