My search for the world's hidden treasures includes looking in my own backyard, namely New York City.

1. The most awaited treasure -- which will hardly be hidden but absolutely worth visiting -- is the soon-to-open High Line Park that represents an amazing transformative design making use of the old elevated railroad line that once ran along the West Side of Manhattan. Here you'll find some of the old 1930s tracks as well as a sundeck and a shallow fountain for dipping your feet.

2. In the heart of Midtown on 51st street between 2nd and 3rd Avenue, postage stamp-size Greenacre Park is complete with a two-story waterfall and a small babbling brook. 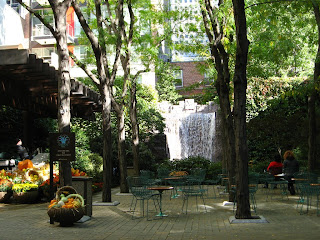 3. Equally small Paley Park sitting on 54th Street between Madison and Fifth Avenues is noted for its 25-foot waterfall and juniper trees.

4. Central Park’s only formal garden, the Conservatory Garden, is an almost undiscovered gem. If you enter on Fifth Avenue, you’ll step past the original wrought iron gates of Cornelius Vanderbilt’s house. An expanse of manicured green lawn spreads before you with an allee of crabapple trees on either side. At the center of the South Garden sits a reflecting pool and a bronze sculpture fountain of Mary and Dickon, two characters from the children’s classic novel, 'The Secret Garden." Depending on the season, thousands of blooming tulips or Korean chrysanthemums grow in the nearby North Garden. 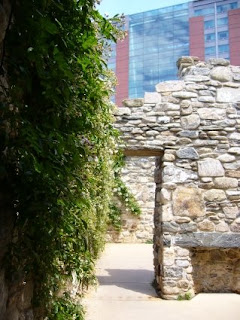 5. A place to enjoy cool breezes and great views is Hudson River Park, where a bike/jogging path stretches five miles along the river from 59th St. to Chambers St. and then continues inland to Battery Park, the oldest park in the city at the southern tip of Manhattan. At Pier 40, stop at the Downtown Boathouse for a kayak rental. Nearby, you can watch people fly through the air at the Trapeze School of New York.

Probably the prettiest section of the Hudson River front is Battery Park City Parks, a series of green spaces from Nelson A. Rockefeller to Robert F. Wagner Jr. parks. Along these 36 acres are wide meadows for sunning and picnicking, planted gardens, a cove with a patch of shaded wilderness and views of the Statue of Liberty. 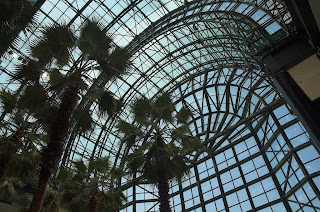 6. Many who stroll this area also come to experience the Irish Hunger Memorial, an unexpected slice of that country's rural countryside complete with rocks and flora brought from Ireland and sweeping across an undulating landscape.


7. The Museum of Jewish Heritage with its unique rooftop "Garden of Stones" dedicated to those who perished and survived the Holocaust. Here you'll find a rooftop dotted with boulders, the base for growing dwarf oaks. It's certainly a place the lends itself to contemplation. 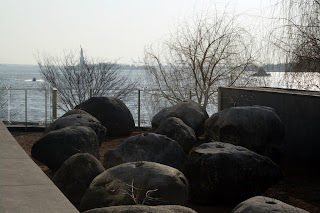 8. Across from Ground Zero, the gleaming Winter Garden is a 10-story glass and tricolor Italian marble atrium with sixteen 40+ foot-tall Washingtonia palm trees. Each month, especially during the holidays and summer, there is some going on, whether a concert or a dance performance.

Posted by J The Travel Authority at 5:24 PM

Hidden waterfalls in NYC? Who knew? Once again, thanks for giving me a wonderful place to check out in the future.

Hi Vera Marie, When I first found this waterfall I was shocked and delighted. Every time I visit this park, I remain delighted.

Hi Jennifer, Yes, I'll pitch them and see what response I get.

I can't wait to check out the waterfall!!

Hi Claudine, I was at the waterfall today. Perfect place to hang out or work on your laptop -- I, of course, was doing the latter. :-)

Hi Sara, Thanks for stopping by. Yes, I love finding urban green spaces. It's one of my favorite things to do in a city.

You will laugh, but NYC scares me. These pictures and descriptions make me think there just might be a reason to test myself with a trip to the city. Meet me for coffee? ;-)

Wow I'm surprised as well, I'd love to stumble upon these hidden waterfalls. How exciting!