Barbados Beyond The Beaches

There’s plenty of development on the island of Barbados but unspoiled locales are never far away. Sure, we know all about the swaths of sandy beaches. But this island is actually laced with dozens of trails running through unspoiled wilderness. Were it not for the Barbados National Trust, one wonders how unspoiled these lands would remain. If you want to explore Barbados' wild side, every Sunday, the National Trust offers guided hikes where dozens of locals and tourists show up.

You're initially broken into different groups based on speed, from those taking a breakneck pace ("Grin n' Bear") to the "Stop and Stare" group that takes plenty of time to smell the roses. I chose the latter, not because I couldn't deal with a challenge but because I wanted more time to learn about the area's botany, history, geology and architecture. 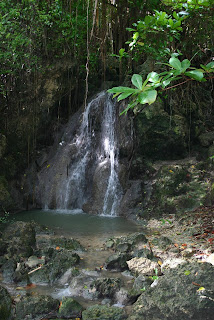 On my five-mile trek, we:

-- strolled along a beach where coral and sea grass grew, great food for turtles.

-- encountered a black belly sheep, a tough animal that can go all day without water. I'm told the meat is very lean.

-- gazed from atop a cliff where I found out that this spot is noted for its stiff wine, the longest uninterrupted wind run in the world, 3,000 miles across the ocean.

-- headed through a meadow carpeted with wildflowers.

But the hike is not a walk in the park. Two miles of difficult walking on slick mud, wet rocks, leaves, roots and stems required good balance, a walking stick or help from the locals -- they're skillful at negotiating the steeps. 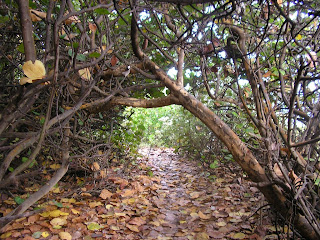 Offshore, we spotted the remains of the old railway line, which, on the land, was converted to a 24-mile walking path.

We only walked a portion of this trail but our guide provided plenty of narration on why the railroad was doomed from the start: landslides and salt corrosion to name a few issues. As one of the steepest lines in the British empire, the railroad sometimes required passengers to get out and walk.

There's not much of a chance of getting lost on the trail. Since sea grape was used to stabilize the railway line and protect it from the salt, by following the sea grape you can easily follow it.

For me, hiking the trails in Barbados provided a welcome way to get away from the typical tourist attractions while learning about the island's ecology and history.

Posted by J The Travel Authority at 4:02 PM

Sounds amazing. I would love to hike in Barbados. I'm much more of a forest person than a beach person (what is there to do on the beach other than swim and get sunburnt anyway?). Thanks for these awesome ideas!

I'm more of a forest person lıke you. Beaches are great and I love them but I'm not one to hang out for hours. Thanks for your comments.

Delightful hike. Thanks for telling us about it.

Hi Vera Marie thanks for your comments. I did many hikes in Barbados and found them all lovely.

So beautiful! I love visiting off-the-beaten path spots like this.

Hi Kris, thanks for the comment. Off the beaten track is definitely my thing. Always full of pleasant surprises.