In northern Norway, bicycling the Lofoten Islands from the town of Svolvaer to Å, I found picture-postcard harbors, bright red rorbuers (or spelled rorbu) aka traditional fisherman's huts) set on stilts and perched on tiny bays, and the ever-present massive cliffs that rose high above. 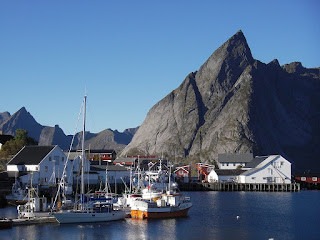 Svolvaer, a busy port town, is a town noted for the Lofoten War Memorial Museum dedicated to World War II. They display original military uniforms and many unpublished World War II photos on display. If you stay overnight in Svolvaer, you may want to take a ferry to the Skrova, a very walkable offshore islet.

Just outside of Kabelva are two institutions -- the Lofoten Museum and the Lofoten Aquarium
with plenty of exhibits that provide insights into life in the Lofotens. In addition, in the Espolin Art Gallery hangs the work of Kaare Espolin Johnson, a well-known painter of the Lofoten people.

In Henningsvaer, a large fishing village, I easily spent a day just strolling the curvy streets and sitting in restaurants and bars along the waterfront. Housed in a former fishing processing factor, the town’s Hus Gallery has an extensive collection of paintings by Lofoten artist Karl Erik Harr. 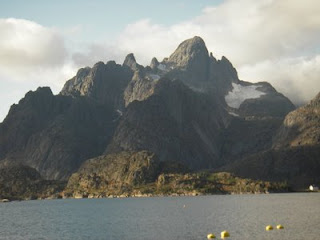 In Borg, I stepped into the life of the Vikings in the Viking Museum, where I examined a replica of a Viking ship, sniffed the aroma of wood tar, saw the flickering of light radiating from cod liver oil lamps and tasted bowls of lamb stew as peasants would eat.

But, some of the most dramatic Norwegian scenery can be found in Nusfjord. It’s also where I stayed in an original fisherman’s hut or rorbuer. To get the most authentic Lofoten experience, staying in a fisherman's hut is a must. In fact, I found it one of the highlights of my trip. Some of these rustic rorbuers come with a hole smack in the middle of the floor which the fishermen used to cast their line.

The town of Reine, another dramatic spot backed by high pinnacles, is the focal point for boat excursions, including trips to the turbulent Moskenstraumen where you may catch a look at puffins and other sea birds.

Nearby, I browned the dolls, teddy bears and historic toys among the more than 2,000 collectibles on display at Dagmar’s Doll Museum.

I easily lost track of time as I bicycled along to the 19th century (and oddly-named) village of Å that's been turned into a living museum. It's also literal end of the road on the Lofotens. Here you can tour the Norwegian Fishing Village Museum with its cod liver oil factory, smithy and century-old bakery that serves up tasty cinnamon buns. For a real education on cod fish, Norway’s oldest export, a visit to the Stockfish Museum is a must. This museum traces every step of cod production from the ocean to the plate.

This sounds like such a wonderful place to visit. I love the out of the way places you find--that's my kind of travel!

I'm wondering if you BROUGHT your bikes with you or rented them there? How much does it cost to rent bicycles?

Hi Vera Marie, Glad you like the kind of travel I specialize in. It´s a lot of fun finding the unexpected even in the places overrun by tourists -- though the Lofotens certainly isn´t that kind of place.

Hi Jennifer, Actually, I haven´t been bringing my own bike for awhile now. It´s much more convenient and less of a hassle to rent. So I rented in the Lofotens and it was very very cheap, like $30 or so a day or there is a better price for multi-day rental.

wondering how long you spent on this trip?

and looking forward to hearing about your experiences at Vaughantown -- I've been considering doing that myself.

Hi Kerry, I spent just a week total. But I could´ve easily have spent more time by staying more than one day in each village.

Really great post, thank you for sharing this and lovely photos.