It may seem unusual to see a wild horse scamping across the sand dunes, but not on Georgia's Cumberland Island National Seashore. Though there are a scattering of dwellings left from before it was designated a National Seashore, I find Georgia's largest barrier island -- it's about 18 miles long -- to be pretty pristine in my book. 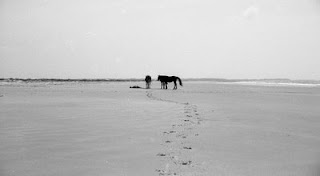 It's accessible only by ferry (you better make a reservation months in advance) or private charter. And don't think about bringing your car: it's not allowed. Here I found everything I love about a seaside wilderness: miles of walking trails dripping with Spanish moss and lush with palmetto and pines, and beaches as unspoiled as they come. On the expanses of white sand. my feet were pretty much the only human footprints around. But walking barefoot on the sugar white surface when the summer sun is blazing tested my pain threshold. 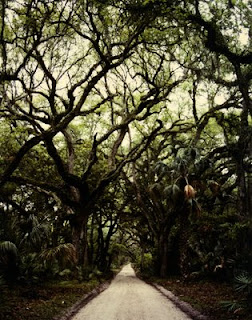 Whenever I visit, I opt for staying at one of the primitive campgrounds -- you need reservations here, too -- where I've seen armadillo crawling through. Instead of an alarm clock, it's the roar of the ocean that awakens me. But if you're interested in luxury, you can spend a weekend at the turn-of-the-century Greyfield Inn that was built by Andrew Carnegie's brother.

This is a land loaded with natural pleasures: I rented a bike and pedaled beside tall live oaks on shaded paths where I cautiously veered around a thick snake that I luckily wasn't close enough to identify. But I knew it could've been one of several vipers, among the more than a dozen snake species that live here. That's what makes Cumberland Island so amazing; you never know what to expect. Wild hogs and turkey, and endangered loggerhead sea turtles call Cumberland Island home. And binoculars are a must because there are birds galore. Sure, tiny sandpipers flit about the miles of beachland. But I also found different gulls, plovers and storks. 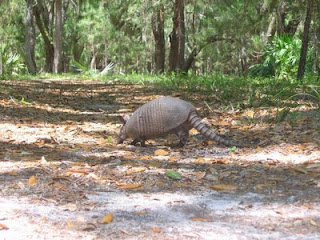 Once you leave the ferry and venture on the trails, you'll really feel like you have the place to yourself. But you can also have plenty of guided activities to choose from by following a ranger to explore Dungeness, the ruins of Thomas Carnegie's house as well as the Plum Orchard Mansion, another former Carnegie family estate. What's especially lovely about this island is how it combines a love of nature with historical artifacts, including the First African Baptist Church that served former slaves from the late 1800s.

Getting to Cumberland Island is difficult, but deliberately so. That way, only the most committed will step on her shores to enjoy her natural delights.

Posted by J The Travel Authority at 6:11 PM

you say" Getting to Cumberland Island is difficult, but deliberately so. That way, only the most committed will step on her shores to enjoy her natural delights."

good way to put it. Cumberland makes a lively contrast to the developed islands such as St.Simons and Jekyll, which have their own charms too. makes me remember it's been far to long since I've been over to any of them.

Hi Kerry, it's always good to put in a little extra effort to find a special place, especially when it means avoiding the overdeveloped options.

Aww look at these, that Armadillo is so cool.