As promised, this is my second post on my recent wanderings in Baltimore. Over the course of four days, I found plenty of activities to keep a type-A person like me delighted:

• With its boldly-hued interior, Miss Shirley's is the place for breakfast. How can you resist an eatery that serves up ten kinds of pancakes, from raspberry white chocolate chip to pineapple? They've even got pumpkin cheesecake-stuffed French toast. There's a definite Southern theme going on here. Think fried green tomatoes with apple smoked bacon; or a three-egg omelet with andouille sausage and blackened shrimp. A perfect summer morning in Baltimore for me would be sitting in their new outdoor space drinking freshly squeezed grapefruit juice and nibbling a three egg white omelet with feta cheese, black olives and red onions. 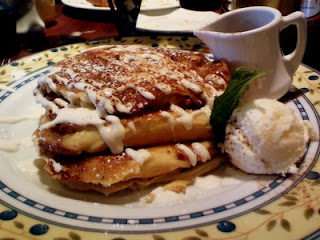 • Later in the day head over to the Trapeze School of Baltimore that is scenically located right on the harbor. Even if you're afraid of heights, you'll be in good hands with these guys. In fact, Scout Day, one of the staff who was taking care of the safety lines said, "We've all experienced fear on the trapeze at one time and fear management is part of the job." One of my colleagues who was terrified of heights not only climbed the tall ladder and mastered the basic knee hang but also managed to do the catch -- where one of the staff, grabs your hands at precisely the right moment. Even if you'd rather not fly, it's plenty fun sitting on the chez lounge chairs or the bleachers on a sunny day and watching the action from the sidelines. 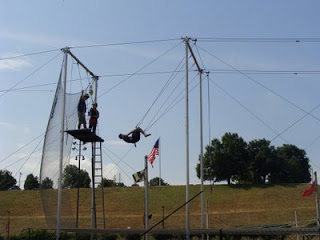 • In what I consider one of the most creative museums around, you should allot the entire afternoon to explore the array of works on display at the American Visionary Art Museum. You can't miss the place: a giant nest abuts the brick facade on one of the buildings while parked outside is a school bus that's plastered with mirrored mosaics as well as a giant mosaic egg. All the artists are untrained who often create their works -- many from found objects, such as paper plates and doors -- in response to a personal emotional event. Hence, visionary art. The works are quirky and worth exploring at length. The coolest items may well an exhibit in which the entire alphabet is carved on the head of pencil stubs -- one letter per stub. (The artist used a razor blade and sewing needle and no magnifying glass.)


Baltimore's mayor is seriously into health & fitness: both her personal fitness and that of the citizens of her city. So twice a week -- Wednesdays & Fridays -- she invites anyone to pedal behind her. I biked with the mayor recently on a Friday afternoon along with almost two dozen people -- many of them regular city cyclists plus city employees -- and was amazed at her pace: around 18 mph. I rode alongside her deputy press secretary on our 22 mile trek through the city's many greenspaces. 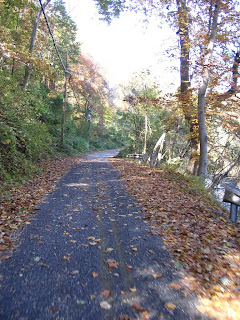 We tackled the lovely Gwynss Falls bike trail and, where our journey crossed into traffic, there was no need to worry: the regular riders, including the mayor's photographer and a very serious and exceedingly helpful and empathetic cyclist, Mark, stopped traffic in both directions so we could continue on our way. And the mayor's black Suburban with her security details followed us when we rode in the streets. The whole experience was a delight, especially riding through some dense woodlands and spacious grassy plots.

• I know I'm going to return to Baltimore if for no other reason than to take another bicycle tour with Ralph Brown who runs Monumental Bike Tours. He's got a tour of the city's murals, monuments (obviously) and to farms that produce food for the local markets.

I attended his bakery tour -- yum, fresh baked goods -- that visited the few remaining mom-and-pop shops in the city. But guess again if you think this is just about eating donuts and danishes. Ralph is an encyclopedia of Baltimore history. At our meeting place he discussed that we were standing on the spot where thousands of of British Redcoats approached in 1814. Then at a third generation bakery, Hoehn's, he discussed the immigrant experience and how Europeans have such a great appreciation for freshly-baked bread. Interestingly, the original oven never gets cooler than 200 F even when it's turned off for three weeks! The donuts and raspberry tarts are to die for.

Posted by J The Travel Authority at 12:24 PM

Your posts about Baltimore have been great, you definitely hit some good spots. Anyone who's not familiar with the city, though, needs to know that you barely scratched the surface! There's also Hampden, the Walters, the BMA, Fort McHenry, Edgar Allen Poe's grave, John Wilkes Booth's grave, Patterson Park, Druid Hill Park, the zoo... Baltimore is a seriously overlooked city with tons of history, charm, and character.

Thank you very much for including cycling in your fun tidbits. I've done the Tour du Port ride through B'more the past two years and will definitely check out Monumental Bike Tours. Can't wait to meet Ralph.

Hi KaliDurga, Yes, you are totally right: I've definitely just provided a minor sampling of all Baltimore has to offer. All the venues you mentioned are amazing as well, especially Hampden and anything to do with Edgar Allen Poe. Enjoy Ralph's tours.

Really good post, thank you so much for the tips and amazing ideas of what to do in Baltimore.