No matter where I looked in Tel Aviv, I found my senses constantly stimulated by the eclectic- and Bauhaus-style as well as contemporary architecture, art galleries and museums, and design emporia. In fact, I could've easily have spent a week just checking out Tel Aviv's art and architecture scene. This is one of several posts details the venues I fell in love with: 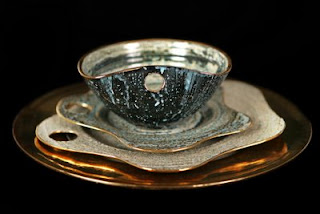 • If you're interested in decorative arts, the Eretz Israel Museum Shop is a must visit. Located just a short cab ride from the heart of Tel Aviv, the museum is an amalgam of everything to do with Israel's history and culture including archeology and traditional crafts. When I visited, I stopped in to check out the temporary "Clay, Sensation" exhibit that displays the works of more than 50 celebrated Israeli ceramics artists, from Samy D. to Karin Zur. This is no ordinary pottery exhibit; many are quite avant garde -- such as a bowl that reminded me of a cell's nucleus and a glowing perforated globe that seems like an alien ship. Definitely worth checking out if you want to see creativity at its best in the ceramics arena.

It's hard to walk away empty handed at their Museum Shop with its array of ceramics and jewelry, both classic and contemporary. You'll find cool glassware and metalworks, Ethiopian sculptures , Bedouin embroidery and even boldly-hued mezuzahs.

• By the way, if you can't get enough of all things design oriented, make sure to get a copy of the "Israel Through Art" guide. Here you'll be able to spend your week or your weekend in Tel Aviv and elsewhere in Israel visiting the boutique shops, private galleries, workshops and studios of some of Israel's top decorative artists. This booklet is a product of AIDA, the Association of Israel's Decorative Arts which is a group of American collectors that are well known in this arena. I wish I had more time because I only found out about this near the end of my trip.

• Along Bialik Street, a placid narrow lane lined with Bauhaus buildings, I appropriately found the new Bauhaus Museum. Open only on Wednesdays and Fridays, this one-room space exhibits the furniture designs that were influenced by the Bauhaus School. Titled "Bauhaus at Home," the display includes tubular tables and chairs constructed of glass, wicker and wood as well as tubular lights, and cabinets with tea sets.

• Almost across the street is the newly renovated Bialik Museum that opened a few months ago. This lovely 1920s home of the country's national poet, Chiam Nachman Bialik, is replete with an ornate tiled fireplace, tiled columns and floors and his painting collection on the first floor. Though all the displays and booklets are in Hebrew, come on a weekend and you might be able to request an English-speaking guide. I did and found out that the building (with its East/West architectural influences) was meticulously restored using the original plans and documents; the the clock in the dining room played what later became Israel's national anthem; and that Bialik would entertain friends and guests at length, discussing politics, philosophy, Judaism and how to build the young city of Tel Aviv.

• Down the same street, don't miss the Rubin Museum, formerly Reuven Rubin's house and studio. The Roumanian-born painter is considered one of Israel's most beloved artists. Dating to the 1930s, the multi-story house displays his sun-bathed landscapes that reminded me a lot of works by Cezanne, photos of Rubin with a multitude of celebrities, including Harpo Marx as well as a few unfinished canvases. The three-floor temporary exhibit -- these change three or four times a year -- is entitled "Van Gogh in Tel Aviv" and displays the oils, charcoals, mixed media and wood sculpture of more than three dozen Israeli artists that pay homage to this master. (Interestingly, the museum's curator was inspired to produce this exhibition when she found an homage to Van Gogh painting among Rubin's unpublished works.)

Posted by J The Travel Authority at 12:52 PM

I missed the Bauhaus Museum last time I was there. I'll be sure and include it next time.

Hi Lisa, I almost missed it too because it was open so infrequently. But it's a lovely little gem.

Oh, it sounds beautiful. I'm hoping to travel out that way soon, so I definitely appreciate the tips.

Hi Stephanie, Glad you liked the tips. Amazing how many things I found in just one short week. If you do get to Tel Aviv, do contact me for any additional tips.

Thanks, Donna. I think you'll really enjoy these and the other museums in Tel Aviv. It's got a real burgeoning art scene.

good to know about that Israel through Art guide. thanks, J.

Hi Kerry, Yes, it's a real find. Just wish I discovered it at the beginning of my trip. Hope to make better use of it next time. Enjoy.

What a wonderful art tour. I wish that I had seen a bit of that when I was there.

Hi Vera, Glad you enjoyed this post. Yes, it's an angle that most people who visit Israel don't take. Next time I visit, I'd like to check out more of the galleries. So many were closed on Friday/Saturday.

I've never been to Israel. This looks like one more reason to go!

Hi "about the book," I'd highly recommend visiting Israel. You'll have a great time with plenty of unexpected and lovely surprises.