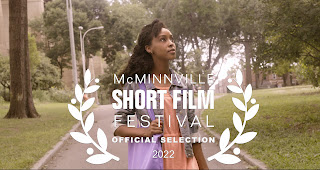 What a great way to start 2022! “Such A Deal,” a comedy that I co-wrote with Dionna McMillian @dionnafilm (who is also the director) is an official selection of the 2022 McMinnville Short Film Festival 🎬 @macfilmfest

It will screen in-person at 6PM, Friday, February 11 in the Drama/Comedy #3 block. I’m so excited that @dionnafilm will be there.

McMinnville is located in the heart of Oregon’s Willamette Valley Wine Country so filmmakers can expect wine-centric receptions. Awesome all around!

Posted by J The Travel Authority at 2:46 PM