Biking for several weeks from Galway down to Cork took me through a rugged land of moorelands and mountains, with plenty of vistas of tumbling seas and serene lakes. Sure, my cycling partner and I passed through cities laden with tourists. But we always managed to stay in touch with nature. These are some of my favorite stops on the trip:

1. The Burren
It's no wonder this remote landscape in County Clare is often likened to a moonscape. It's a waterless limestone expanse that's peppered with dolmens and other prehistoric ruins, and networked with caves. This land is said to have seemed so desolate to Oliver Cromwell when he launched his invasion of Ireland in the mid-1600s that he complained that there wasn't even any soil to bury a man, no tree to hang 'em, and no water to drawn 'em. Dramatic, yes. But it's certainly curious that, despite the stony surface, some fairly rare plants thrive here, including colorful bee orchid, Irish orchid, rock rose and spring gentian. 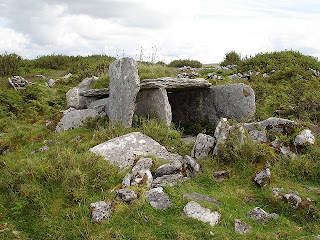 The luminous colors of the sky and sea in Connemara in County Galway have long inspired artists and writers, such as the painter Paul Henry and Tim Robinson who penned "Stones of Aran", and other books. With its swaths of sandy beaches, soaring cliffs and rolling hills -- as well as one of the most noteworthy features, the Twelve Pins, which are mini mountains, of sorts -- Connemara is a magical land that captures the attention of all who set foot on her shores and ramble about as I did. Though it may be the most visited locale in Connemara, Kylemore Abbey, a19th century estate which more than resembles a castle, is worth exploring more for the Victorian Walled Gardens than for anything else. Here I found meticulously landscaped grounds with greenhouses, blooming flowers, ferns and even herbs, fruits and vegetables that are used in some of the restaurant's dishes. 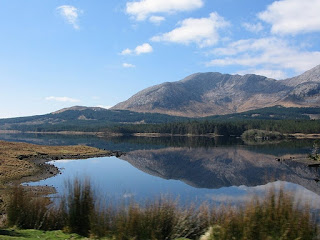 Sure, Killarney, in Ireland's southwest corner, is a key tourist spot. No wonder, considering the Ring of Kerry offers dramatic vistas of coves fringed with sand, rugged headlands and turbulent seascapes. But a few of Killarney's lakes that mirror different shades of blue are in the national park that's strung with several scenic nature trails. For example, the one mile Mossy Woods trails wanders along low cliffs with great views of Muckross Lake. Along the two mile Arthur Young's trail, you may spy the small Sika deer as you stroll through oak woodlands and past old copper mines. 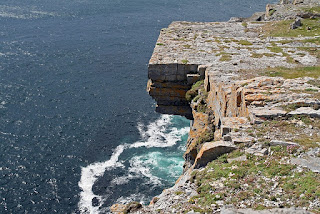 Visiting the Aran Islands is like stepping  through a time portal to another era. We took a very turbulent ferry ride from the mainland and landed on the largest of the three, Inishmore, where the locals can be found wearing traditional garb: the men dressed in homespun jackets and the women in long colorful wool skirts. On this stony isle, we biked through Kilronan, the island's main and vibrant fishing village, and headed to one of  Inishmore's most well-known features: Dun Aengus, a circular low stone-walled fort that sits several hundred feet above the sea. Scientists debate as to its age, but it may date from 4,000 BC. The island also offers some dramatic cliff walks that start from Kilronan and wander through a lone woodland to the clifftops where you have views of sandy Kilmurvery Beach.

Posted by J The Travel Authority at 12:40 PM

When our kid is older, this is something I really would like to do. The husband and I have often talked about it,

I would love to make this trip. I'm moving it up on our list of places to visit on retirement.

I'm emailing this post to my husband! The countryside looks gorgeous. I'd love to visit someday.

Hi Alisa, Cool! I know you'll enjoy it. It's one of my favorite biking destinations.

Hi merr, thanks so much. Hope you get to travel there and enjoy, whether you do it from the seat of a bicycle or you drive or walk. It's all lovely.

I'd absolutely love to do a cycling tour. Is it extremely hilly? I'm gonna start to get in biking shape right now...Love your photos.

Gorgeous, gorgeous photos. Though I would NOT want to walk out on that ledge! I would admire it from afar.

Hi Sheryl, Yes, it's definitely hilly. In fact, it was so hilly that, as I cycled with my friend who was a much slower cyclist, I waited for him at the summit of each hill and read my book. I ended up finishing a good part of the book just waiting for him!

Hi Jane, I'm acrophobic, too, but I didn't really get close to the edge.

So is it easy to find a place to rent bikes? Did you pass many other bikers along your way? I still recall driving through a section of Colorado near the continental divide and there were plenty of cyclists despite the high altitude and the steep road.

Hi MyKidsEatSquid, We brought our bikes with us. So I can't address the issue of bike rental. We passed lots of locals cycling from one village to the next. But we didn't meet anyone who was doing what we were doing. However, I know many people who have biked Ireland's West Coast and adored it as I did. I've biked all over Colorado as well, including the infamous Trail Ridge Road.

I sure wish I could photoshop myself right into that first shot! Gorgeous.

I want to take this trip too.

Hi Sarah, You'll adore Ireland, whether you bike, drive or walk it.

Hi Living Large, Cool! Hope you have a chance to visit soon. And if you need any tips beyond this post, don't hesitate to let me know.

Hi Kris, That's funny! It certainly is an amazing landscape.

The power of the elements never ceases to amaze me - the rock formation in the last photo is a wonder by itself!