Two problems have always plagued my travels: my ears bother me when the plane is descending and I'm prone to motion sickness when I'm in small planes flying under turbulent conditions or I'm in a boat. And, because I love gadgets, of course I've found two devices that have basically taken care of these two problems.

EarPlanes is an inexpensive, disposable set of silicon/ceramic ear plugs that I put in my ears before the plane changes altitude and I keep them in until we land and the cabin doors open. Sure, I may look a little weird with these odd-shaped plugs sticking out of my ears. But, they've banished my ear pain so appearances don't matter. It may take a bit of getting used to them, but they have the added advantage of blocking out some noise as well. I find it's best to use a new set with each flight. 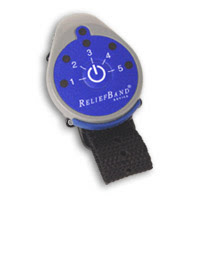 The other device is ReliefBand, a watch-like gadget that I wear on the inside of my wrist. This is a very sophisticated device and shouldn't be compared with the inexpensive elastic bands that drug stores sell. Once you turn on this battery-powered device, it delivers a mild electric shock to the acupressure point that has an anti-nausea effect. Interestingly, ReliefBand is approved by the Food and Drug Administration (FDA) to relieve the nausea associated with surgery, pregnancy and chemotherapy. It also happens to work with motion sickness. I've worn it under some very unpleasant conditions on the sea, and I'd say I was significantly more comfortable with it than I had been without it. In fact, last summer when I was in Croatia, almost everyone on my yacht became quite ill when we sailed to a particular island. Those who weren't ill were taking drugs that put them to sleep. I sat on deck comfortably reading while wearing my ReliefBand. But you have to wear the band tightly on your wrist, you have to position it so you feel the tingling in your fingers, and you have to crank it up to a level that relieves the nausea. Do all that and you should be pretty OK.

LuxurySafariExperts.com Visit the blog and comment on today's post for a chance to win folding noise-cancelling headphones courtesy of Magellan's Travel Supplies.

Posted by J The Travel Authority at 12:00 AM

Really great tips these items are so essential that you wouldn't want to leave without them.