Madrid is one of my specialties. And, because I often like quirky activities, I found that a walking tour with the offbeat (some might say eccentric) Chairman of the Wellington Society of Madrid fits right in with my sensibilities. I've taken many of his walking tours and, with each one, I came away with lessons in Spanish art, history, literature and plenty of royal and political gossip and rumors. Whether it's a night walking tour in Madrid or a day trip to Segovia, visitors who tour with Stephen Drake, a former art history professor, will have a unique experience. 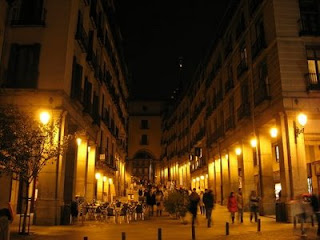 The Wellington Society of Madrid is not a tour company, but rather a society involved with education, culture and research. So, in order to sign up for any tour, you have to first become a member (and pay 50 euros). (Prices for the individual tours vary.)

Named for the Duke of Wellington who is most remembered for the Battle of Waterloo, the Society offers its new members a free two-hour walking tour of Madrid, plus tapas/wine stops along the way, as well as a travel help line and restaurant/wine recommendations, all for a 50 euro fee.

Here's what I learned on the many walks Stephen led:

• On the Hemingway’s Madrid walk, for example, we visited the writer’s favorite watering holes, hotels, cafes and restaurants.

• On the Bloody Madrid tour, Stephen pointed out the street where an assassin killed a philandering count on orders of the king, and the apartment where a writer, as renowned as Dickens. killed himself over a lost love. 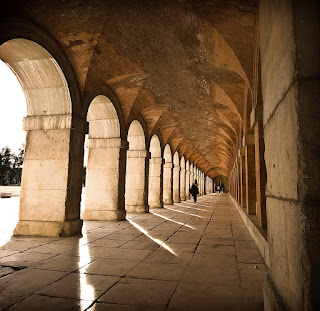 • In Aranjuez -- a day trip from Madrid -- Stephen told me that the Bourbons hated to read but instead entertained themselves on the property’s hunting grounds and landscaped gardens.

• In Segovia, most people learn about the Roman aqueduct but Stephen pointed out the house where the public executioner would stay, the four restaurants favored by King Juan Carlos, the King of Spain, and the castle that inspired Walt Disney in the 1950s.

• Visiting the Valley of the Fallen, I got the real story behind the 50-foot-tall cross that sits above the underground basilica. It was not built, as most tours are told, as a memorial to some 40,000 soldiers of the Spanish Civil War but, rather, in honor of Franco and his right-hand man. In fact, tens of thousands of Republican prisoners were the laborers over the 19 years it took to build it.

Posted by J The Travel Authority at 2:58 PM

I see you are around Spain, and I'd like to contact you 'cos your blog is great!

I'm running a blog about Barcelona http://www.mediaforis.com/barcelona-guide-bureau/. It's for a tour agency for English speakers: http://www.barcelonaguidebureau.com/index.php.

I don't know if you'll be coming soon to Barcelona, but I hope you keep us on mind so you can come and do a tour with us! And, as we like very much your blog, we'll be very happy if we can also do an exchange links with your blog!

hi alba, thanks for visiting and so glad you like my blog. Spain is one of my specialties and I was in Barcelona this past New Years. Iºll certainly check out your blog. Iºm traveling for a month right now. But when I return Iºd be glad to exchange links.