A Beach For Every Personality in Vieques

As far as Puerto Rico goes, one of my favorite places is Vieques, the offshore island that once had a reputation as a test-bombing site for the U.S. Navy. The only plus to that situation: the seaside remained largely undeveloped. With the Navy now completely gone as of a few years ago, I have concern regarding overdevelopment along the waterfront and elsewhere. But there are still so many untouched sandy swaths and secluded covers that you'll easily find a place where you'll feel like Robinson Crusoe. Here's a large sampling of the beaches I've visited; each offers a different pleasure, whether you prefer to set your blanket in the midst of crowds or you would rather stroll the sands without any distractions.


• Sun Bay, where Lord of the Flies was filmed, is so easy to get to that it's the beach everyone flocks to on the weekends. I enjoyed hiking around Cayo de Adentro, one of the keys that's accessible by walking on a narrow spit of sand. Visitors to Sun Bay will have plenty of opportunity to eat local food thanks to vendors at the entrance selling cod fish fritters, mashed plantain with meat or seafood, conch salad and pastelillos. 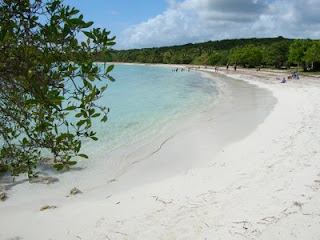 • A short walk or drive down the Beach Road is Media Luna, named for the half moon shape of its bay. This calm water attracts families who wade several hundred yards into the still water and, like Sun Bay, is fringed with tall coconut palms.


• The next beach, Navio, is renowned for its white sand and clear turquoise water with strong waves that make it good for surfing. On either side of the beach are caves, one where fruits bats live, that you can either swim or walk to. 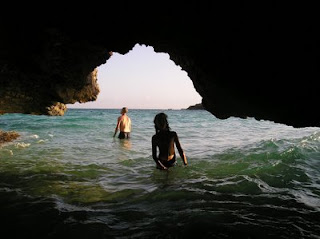 • At Esperanza Beach, in the eponymous town with restaurants and bars aplenty, you can get away from it all by snorkeling around the coral reefs of the uninhabited island, Cayo Afuera, that sits a few hundred feet offshore. You can easily kayak to the island that's also noted for its surf-battered sea cliffs.

• On the west end of the island, Green Beach is where the Atlantic meets the Caribbean. From there, I parked the car and walked to a series of sandy coves that are so desolate yours will be the only footprints. Most visitors stop at the main beach rather than continuing south to a rocky point and then east to a series of beaches with intimate coves and stands of coconut palms. Backed by hills topped with scrub, these beaches are desolate with desolation with sculpted boulders.


• Among the beaches that were off limits but opened to the public as of 2003 are Red and Blue beaches on the east end of the island. (They are now part of the Vieques National Wildlife Refuge.) Playa Caracas (Red Beach) is one of the prettiest on the island with white sand, gentle waters and volcanic outcroppings. The much longer Bajia la Chiva (Blue Beach) allows those with four-wheel vehicles to drive onto the sand.

• Also on the island's once off-limits east end are the latest beaches to open to the public. These include Playa Escondida, Playa La Platita and Playa La Plata (Silver Beach), aka Orchid Beach. No matter which one you choose, you'll be delighted with the bay views as well as the expansive verdant hills in the distance. The often calm waters make La Plata especially appealing.

Posted by J The Travel Authority at 4:31 PM

This description of beaches makes me want to go back to Puerto Rico. I haven't been there since I was 16 (and got the worst sun burn of my life).

Hi About the book, Yes, you should definitely return. So much has changed but for the good. You always remember where you got the worst sunburn -- I do too. (It was in Florida on spring break.)

I'm headed to Puerto Rico for the first time in December. You've got me so excited for it now! Cayo Afuera sounds especially intriguing...

Hi Tony, Hope you have a great time in Puerto Rico and that you have a chance to visit Vieques for a few days. If you need any additional help with ideas of what to do when you're there, don't hesitate to ask.