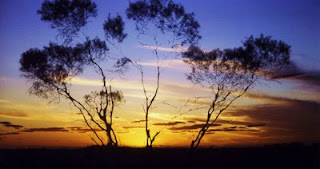 Sure, Nicole Kidman's character had plenty of challenges to contend with in the movie, Australia. But there's never a dull moment for Marlee Ranacher and her husband, Franz, the owners of the Bullo River Station as well as those who work on the property in Australia's Northern Territory. I watched in wonder how Marlee multi-tasked as a medic, vet, herd boss, ranch manager, clearing the dirt roads with heavy equipment and taking care of two young children to boot.

And things are never dull for those who stay at this working cattle ranch in the northwest corner of Australia's Northern Territory. (I arrived from Darwin on a small single-engine plane and landed on the ranch's grassy landing strip right in front of the main house.)

During my stay, one afternoon, I leisurely cruised down the Bullo River Gorge with its towering sandstone cliffs where we spotted crocodiles lying on the banks.

On another day, I fished along the river with my guide, hoping to catch the much-sought-after barramundi, but no luck. (Maybe it's because I was a bit distracted: I had one eye on the nearby crocodiles.)

At the sandy mouth of the river, I walked to a placid beach spot for a picnic where we were told there would be no intrusions by the crocs because our guide would easily spot their prints.

One morning, we took a guided walk to the red sandstone escarpment and explored the relatively recently discovered Aboriginal rock art painted on the rocky surfaces amongst the many nooks and crannies.

Even an ATV ride through a minuscule part of this half-million-acre property can present surprises with dingoes, wallabies and wild boars crossing our path.

The highlight, however, was being whisked by helicopter to a private, secret beach a mere 15 minutes away. Snuggled amid soaring red sandstone cliffs, this tiny swatch of fine sand sits beside an array of natural turquoise-tinted pools and cool, cascading waters. Each varies in depth and temperature but all offer a delightful swimmable experience. But, even better, you can have this place all to yourself for one night with no chance of intrusions by humans, crocodiles or other creatures. Marlee and Franz will leave you with everything you need: a satellite phone, sleeping mattress, mosquito netting, all your food including grilled barramundi and wine, deck chair and beach towels.

Guests are welcome to participate in as many cattle-related activities as they want. Marlee told me that they could learn to brand, and watch a curious helicopter muster. "Some of the ladies want to learn to castrate a bull," said Marlee. I skipped out on that activity. But I found that no matter what activities guests choose, a short stay at the Bullo River Station is a memorable experience.

Posted by J The Travel Authority at 10:15 AM