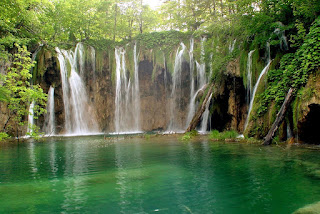 1. The Baroque village of Varazdin is a mere 40 minutes away but it feels worlds apart, especially if you arrive during the annual late summer Spancirfest, which celebrates art, music and medieval times. I wandered about and found women making lace using bobbins, men selling brandy brewed from medieval herbs and craftsmen displaying reproductions of 9th century jewelry. In this quaint old town, Baroque manor houses are detailed with elaborate carved doorways. The Herzer Palace houses an Entomological Museum with a fascinating display of not only insects big and small --- from tiny ants to giant beetles, but also rare species. (If you're into insects, you could spend hours here.) The Rococo Sermage Mansion holds exhibitions of old and modern masters. Presiding over the town with its ornate churches is a 16th century castle that's home to a museum tracing the history of furnishings through the centuries. But maybe the crowning glory among the city's sites is the Groblje cemetery. I’m definitely no fan of cemeteries but this is a must see. The sculpted hedges, shrubs and trees are as decorative as the tombs and mausoleums they snuggle.

2. Alpine-like Samobor, a mere 15 minutes from Zagreb, is a small old town sliced by a trout stream and nestled against the forested mountainous slopes. Most people, including myself, stop here to sample their famous samoborska kremsnita, a vanilla custard cake in phyllo dough. This is a huge cake that I gobbled in no time. Even if that's the sole reason for your visit, don't miss the short but very steep hike to the 13th century fortress ruins. (A good way to burn off the calories.) This area is also perfect for paragliding, caving and mountain biking.

3. Plitvice Lakes National Park, once occupied by Serbs during the ware in the 1990s, is a magical land of tumbling waterfalls and placid turquoise lakes. To fully appreciate this UNESCO World Heritage Site, plan on spending at least four hours strolling the boardwalks that traverse the cascading waters. This park is noted for its rich array of plant life -- some 50% of the species that Croatia protects. This is Croatia's most popular park, which means there are crowds aplenty. But don't let that disuade you from visiting this unique, unusual park where you can still find places to enjoy a waterfall in relative solitude.

Posted by J The Travel Authority at 1:13 PM

hi jeanine! i promised to post and here i am~ we met on the subway in nyc. we were going to soho and you told us to eat at two boots which we did after i asked someone where twofeet was! wretched memory! it was yummy pizza! enjoyed soho tremendously...bought etchings from a street artist and some wonderful pieces from carrol boyes shop on prince. do check it out! we LOVED mamma mia! anyhow, thanks for your friendliness and guidance which helped make our time in nyc even better! if you make it to ohio...in your travels...ok, so not the most exotic destination, but we have GRAETER'S ICE CREAM....be in touch! marilyn rtwins08@att.net

Hey, great to hear from you and thanks for posting. Glad to hear your trip to NYC was a fun one. I love Graeter's ice cream. Ohio has many lovely sites, including Cincinnati's wonderful parks and gardens.