Corsica's Beauty Far From The Coast 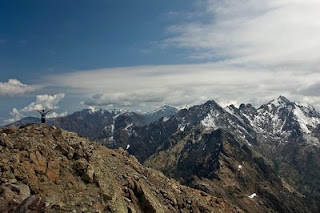 Corsica’s coastal properties may get almost all the tourist traffic, but hiking through the interior with Vallecime tours is how I experienced the wild side of Corsica. Specializing in guided hikes based out of two bed and breakfasts, this local company organizes private treks for couples, families or groups of friends. For a week, my three friends, Andrea, Eric and Dennis, and I climbed and descended the rugged picturesque terrain covered with aromatic maquis with our local guide, Laurent, who gave us a window into authentic Corsican culture, pointing out all manner of geological and botanical finds, and taking us to plenty of spots so we could sample local culinary delights. No matter which village we enter, our guide meets and greets people, whether a man delivering supplies to one of the mountain refuges, or a woman driving the grocery truck, which brings produce to the villages who live far from markets.

Starting in Sant Andrea di Bozio with its schist stone houses some 2,600 feet above sea level, we trekked through peaceful valleys, circled glacial lakes and wandered along old shepherd and mule paths where, on one day, we ran into a wild boar hunt where Laurent knew the hunters. On another day in the isolated Niolu Valley , we found a shepherd selling fresh sheep's milk cheese. Majestic peaks rose all about, including Mt. Tafunato with its prominent hole -- attributed to the devil as are several other land features -- where clouds often float through.

In the hamlet of Poggio, our bed and breakfast, the five-room Casa Capellini, sits along a terraced property where pumpkins, tomatoes, peppers and lettuce grow in the vegetable garden. From here, dramatic peaks are visible from just about anywhere. In another village, San Quilico, an old milling stone forms part of a doorway, and a schist oven still stands where villages once baked bread. In the area of Casamaccioli, the village that's home to our second inn, Casa Vanella, most of Corsica’s high peaks can be found.

Interestingly, one of the co-owners of Vallecime, Jean Francois, held the record, until recently, for running the 120-mile GR 20, Corsica’s most famous high mountain, long distance hiking trail. (He managed to finish this rugged route, that's considered Europe's most difficult, in a mere 37 hours; it normally takes hikers about a week.)

Trail markers were rare where we hiked because, as our guide noted, “This is the land of freedom and any signs are a form of pollution.” Corsica’s independent spirit is ever present. The island has few resorts. No wonder, considering separatists have been known to demolish construction sites. And just about everything runs wild: bulls, cows and sheep on village streets, pigs outside our B & B, and horses and goats beside our trails.

In Casamaccioli, the village that's home to our second B & B, Santa di u Niolu , the island's most important folk festival, has been celebrated every September for more than 500 years. Commemorating the old ways, this fair, with its handicrafts and regional food specialties, has long attracted all manner of Corsicans, especially shepherds who would herd their flocks back into the valley.

Posted by J The Travel Authority at 1:03 AM

sounds like a fabulous trip! I've been waiting for someone to write a travel story about Corsica's interior. Nice job!

Hi Marilyn, Thanks for your comments. I love Corsica's interior and glad you enjoyed the post. It's a shame that most visitors don't journey away from the seaside and enjoy the interior as well.

I was in Sardinia last summer and could see Corsica slipping by the windows of our cabin on the ferry. Looked outstanding, with huge mountains erupting right out of the sea. At any rate, we're certainly hoping to get there soon. Looks like you beat us to the punch!

Hi Tim, Hope you make it to Corsica. It's a beautiful wild place. And because Corsica & Sardinia are so close, I visited both on the same trip: Corsica is definitely better for hiking while I bicycled Sardinia. Though, of course, the latter has amazing hiking trails as you know.