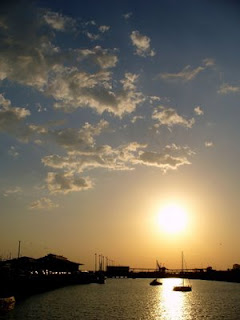 Often seen as a stepping-stone to the Northern Territory's national parks, Darwin, Australia's northernmost city, is a paradise destination in its own right. "Australia," a "Gone With The Wind" romantic adventure set in the Outback and starring Nicole Kidman and Hugh Jackman, was shot in Darwin. And this is a perfect time to visit given the number of new and improved activities.

1. In this city where young people and entrepreneurs flock, one company is taking advantage of the network of flat bicycle paths wending through the city. (Almost 50 miles of paths criss cross the city.) Darwin Walking and Biking Tours offers day trips along the beachfront lining the harbor as well as to the lush botanical gardens and other green spaces and landmarks. I took one of their two-hour walking tours where we strolled past Aboriginal sites, several museums and a World War II memorial, Our guide peppered this ride with plenty of worthwhile
trivia, including that the Japanese dropped more bombs on Darwin during World War II than Pearl Harbor

2. In addition, a relatively new aboriginal-run tour company, Unique Indigenous Land Tours offers an all-day tour where you'll have plenty of opportunities to sample bush foods -- the mangrove worms don't taste like chicken but they do taste like oysters -- and even go barramundi fishing the traditional way.

3. One way of taking advantage of Darwin's warm weather is by attending the outdoor Deckchair Cinema. Set along the lovely harborside, you can get comfy and watch either art house or big budget films. The cinema is up and running during Darwin’s dry season which is approximately from May/June to September/October.

4. Watch the glorious sunset from the deck of the 100-foot-long schooner named the Alfred Nobel. (It was once an explosives barge.) On this dinner cruise, I dined on grilled barramundi and local Tiger prawns.

5. You'll see Darwin for the melting pot that it is especially on Sunday and Thursday nights if you visit the open-air Mindil Beach Sunset Markets. (This is also during the dry season.) This is not like any outdoor market you've ever seen because it's almost like a culinary United Nations. Here, I sampled fish wrapped in a cassava leave and paw paw salad.

6. Darwin even has its own theme park of sorts. At the relatively new Crocosaurus Cove you can swim with the crocodiles. But don't expect any bloody accidents here. After all, in their “Cage of Death” there is five-inch-thick acrylic between you and the 20-foot-long reptiles.

Other activities include the Sunday pub crawl as well as gallery hopping and checking out the recently renovated waterfront.

Posted by J The Travel Authority at 10:25 AM

I definitely prefer the black writing on the white background, I thought the reverse caused shadows which was difficult to read. This post makes me want to go to Darwin, Corsica was already on my to-do list to revisit.
I love your banner by the way

Hi Sarah, thanks for the feedback. Yes, I resisted changing the colors but I agree: it's more readable. Glad you like the banner also.

Yes, absolutely much better this way! More accessible to more readers, including this one. I can't wait to get to Darwin!

Hi SarahT, I really appreciate your comments. You'll love Darwin. I could've easily have spent a week just there.

Hey Lisa, So glad you like the new look.