THE FIRST TO SEE THE SUN RISE ON NEW YEARS 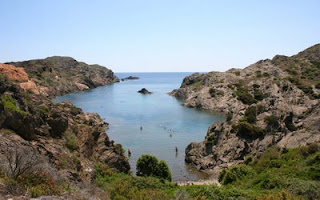 I just returned from a week in Cadaques, a town in ’s Catalunya region where Salvator Dali lived with Gala for many years. This seaside town is packed in the summer but a visit around New Years allows you to participate in an interesting tradition: The locals drive from the surrounding towns to the peninsula of pristine Cap de Creus – a half hour from Cadaques – to celebrate the sunrise on January 1st. No wonder, considering this windswept nature reserve with its rocky cliffs and headlands and working lighthouse is so far east that it’s the first place on the to see the sun rise. Some years a thousand or so folks start out at 5 in the morning in order to get a parking space either in the small lot beside the lighthouse or, if that’s full, then along the roadside. The lighthouse played a prominent role in the 1970s film: “The Light at the Edge of the World.” And standing on the cliffs, whether in the wee hours of the morning as I did or later in the day, does feel like you’re at the end of the world.

Since it’s a nature reserve with unique flora that carpets the rugged slopes, the only building beside the lighthouse is the Restaurant Cap de Creus, housed in a former administrative edifice. The restaurant, that features Catalan and Indian cuisine, takes reservations for the multi-course New Years Eve dinner which is amazingly popular. I didn’t make it – I was too busy dining with friends in Cadaques and then eating the traditional 12 grapes right before – but I heard they were packed. When we arrived at on the 1st we found about 15 people who had stayed all night – also very typical here. They were still dancing (the restaurant hosted a jazz big band on New Years Eve but the music transitioned to meringue as that band packed up) but now they were drinking café con leche rather than something stronger. It was cold outside with a bitter wind so my three friends and I waited in the restaurant until as more and more people gathered.

Outside, musicians with a variety of wind instruments set up as did those who would lead the national dance of Catalunya: the Sardana. At the band members started playing and several circles of dancers formed, each member’s hands were linked to the other and all had their arms raised high. Near the band, women set up long tables full of freshly-made and steaming thick hot cocoa and almond coffee cakes and biscuits. We warmed our hands with the cups of hot chocolate while staring out across the rough seas, hoping the thick cloud cover won’t obscure the event. I noticed that many people came prepared with blankets and sleeping bags and carried these partly down the rocky slopes where they perched, waiting for the big event. Others walk out to the edge of a rocky headland. Finally, a thin strip of pale yellow light appeared in the east. To the right, a tiny ball of orange. The crowd registered a collective “ahhh.” The dancing, cocoa drinking and almond cake munching continued until around 9 a. m. when most people wandered to their cars and we decided that, since we couldn’t feel our feet, it was time to get back into the car. Of all the things I’ve done to celebrate the New Year, this was probably the loveliest. A sure way to not only get in touch with ’s natural beauty but also its nationalistic people in the Catalan region.

Posted by J The Travel Authority at 3:05 PM

Great report. I love it.
Cadaqués is really a beautiful village. Dalí said that Cadaqués is the most beautiful place in the world...
Thank you!

Hi Torsten, I agree. Cadaques is a very magical place.

To swim in coves like that in the picture is wonderful, above all early in the morning when there are no turists.
Cadaqués is one of the most beautiful villages in Spain.

Hi Ramon, Great to hear from you. Yes, I agree. Cadaques is a very special place.