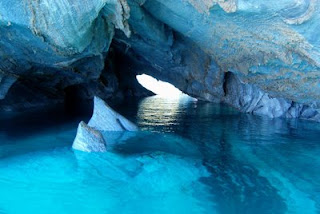 I promised you more on my adventures at the Hacienda Tres Lagos in Chile's Aysen region. I packed a lot into a weekend:

1. My guide took me fly fishing to a point located between the teal blue Lake Bertrand (teal blue) and sea blue colored Lake General Carrera. I was hoping to catch any of four types of trout: steelhead, brown, rainbow and spotted. I'm told the biggest fish a guest pulled in was 40 pounds! But I'm suffering from bad technique. My guide told me I need more upper body and wrist action in the final cast to shoot the line out further. Oh well. No trout, 40 pounds or otherwise. But the views were outstanding: towering peaks studded with glaciers. It was oh, so peaceful, except for the sound of the currents.

2. One day we drove to Lake Bertrand where I found out that the fly fishing is alright if you hop aboard a raft and paddle to the middle of Rio Baker. (This river is also great for rafting the class III rapids). The lake, however, has too many people vying for too few fish. Instead we continued on to the confluence of the Rio Baker and the Rio Neff. There was a beautiful viewpoint of the raging Baker cascading over boulders.

3. Later we trolled on Lake Bertrand hoping to catch something. It didn't matter, however, because the views of the Fuentes Glacier were phenomenal. Finally, another try at fly fishing Lago General Carrera, this time it's evening so I'm hoping for better luck. But, no. Not a bite. Yet the purplish-colored peaks and wisps of clouds over the glaciers made it all worth it.

4. The next day was my fab excursion to the Marble Caves where we hopped aboard a small motor boat to cruise parallel to the shore. Here, there were soaring sea cliffs of marble. And thanks to wind and sea erosions their features are cast into curious formations that look like tree trunks and arches and caves, some wide enough just for the boat to pass through. Looking into the water I found colorful marble formations below as well. The Cathedral and the Chapel are the most famous.

5. Another amazing excursion was to the Explorer Valley on the gravel road that's only three years old. Before it was built, the only way into this area was on horseback. Glacier and ice studded peaks are all about and water running down from the high country to the roadside, with the occasional cascading waterfall. This is a road that's hard to drive because you want to look everywhere but at the road. Finally, we arrived at a short interpretive trail: Sendero Interpretivo Glacier Exploradores. The plants in this lush terrain are all labeled, including a fern with a name that means ribs of the cow and the holy tree. We climbed steeply among boulders that are part of a glacial moraine. And there in front of us was the bluish-tinged Explorer Glacier.
6. My last trek was on the day we had to drive to the airport. I managed a short hike to a lovely viewpoint where you can peer at both Lago Negro and Lago Carrera. We also passed the point where you could do a canopy tour but, alas, time didn't allow it. Hopefully, next time I'll spend a week.

Posted by J The Travel Authority at 5:59 PM

Wowwww, you really take us with you.

And we love the ride.

Glad you enjoy my journeys. Hope they're helpful to you when you plan your travels.

Wow! You are such an action adventuress! I am still remembering us driving that jeep in Puerto Rico. Remember that?? That was the best trip ever.

Hey Lisa, thanks for taking the time to post. Off road travels in Vieques sure was fun. And Patagonia is a great place for adventures that seem to occur around almost any curve in the road.