Codfish – Have It Your Way 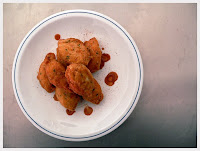 In , it's easy to miss the entrance to OhCOD, a restaurant that opened for dinner in spring 2008. After all, the simple, nondescript facade displays the name Santo, its lunch restaurant that transforms to OhCOD for dinner. (The two have completely separate menus and atmosphere – the evening spot is candle laden and intimate while the lunch restaurant serves cafeteria style.) At night, instead of the usual meat-laden rodizio, the restaurant, housed in a 19th century building, is doing a unique fish rodizio, serving up bacalhau or cod eight ways -- and as much as you can eat. Among preparations of noted Portuguese chef Michel da Costa are: carpaccio with the fish smoked over wood derived from port wine barrels; salted and dried and then soaked in milk to reduce any strong flavors; combined with potatoes and squid ink and then fried into an oval fritter; a mousse of fish and paprika; and cod strips fried with eggs, salsa, onions and potatoes. My two favorites were the carpaccio and the fried cod with eggs. In fact, I had several portions of both of these. The other six preparations were tasty as well and none displayed a strong fishy aroma that turns a lot of diners off. The two wines I sampled during this meal were a Fado White made from antao vaz and roupeiro grapes; and the Fado Red made from four grape varieties: aragonez, bouschet, touriga nacional and trincadeira. The white is crisp with an apricot nose while the red was bright with a smooth finish. Having filled my belly with too much cod, I passed on dessert which was an olive oil ice cream. It’ll have to wait for my next visit.

Posted by J The Travel Authority at 2:00 PM

Glad you think the cuisine sounds yum. This restaurant is definitely worth a visit.

That sounds like my sort of resturant, looks so tasty.