I'm hoping that Red Hook, Brooklyn won't follow in the footsteps of Williamsburg where glass and steel towers crawl along the waterfront, obstructing views of the river for all but the few who can afford to live in these condos.

So far, Red Hook has avoided the Williamsburg syndrome because it's pretty isolated, transit-wise. There's no subway. So you're basically stuck taking a meandering bus or the IKEA ferry from Pier 11 at Wall Street (or driving, of course). Civil War-era warehouses line the waterfront, including one where the Fairway market has a home. Some house manufacturers while others are storage repositories. With its low-slung buildings, proximity to the water, handful of seafood restaurants and tight knit community, Red Hook very much feels like an intimate fishing village.

I visited Red Hook a couple of times in the past few months on my own and each time, as I tasted the salt air, delighted in the gentle breezes and enjoyed digging into a basket of fried clams, I felt like I had stepped off New York City's shores and onto another windswept land, like Block Island. And yet, it wasn't until I signed up for a walking tour with Dom Gervasi of Made in Brooklyn Tours that I fully experienced and appreciated all that Red Hook has to offer. 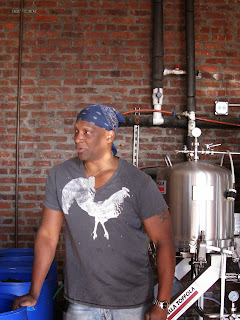 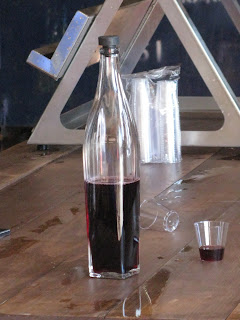 Jack from Brooklyn
An open garage with gleaming equipment inside is the only sign that something is brewing. Jack Summers, the owner who has Caribbean roots, makes and mass-produces Sorel, a hibiscus-based liqueur, in this brick walled space. This smooth tasting, violet-hued potion is attracting a significant following, including me who usually abhors hard liquor.

Jack, like many of the people in Red Hook, almost lost his business when Hurricane Sandy hit, bringing with it five feet of water that washed into his establishment last October. But the community pulled together, bringing the shop back in operation two months later, relaunching in January 2013.

The idea for this product came from the traditional party drink in the Caribbean, though each island has their own recipe: some use hibiscus, all spice, orange peel and rum; while others rely on the hibiscus plus ginger, nutmeg and cinnamon sans rum, and many other variations. (It's a beverage he'd made in his kitchen for friends for some 20 years.)

The hibiscus flowers are the key component. (The robust flowers from Morocco lend tartness and color to the beverage.) Then there's Brazilian cloves (for brightness), Indonesian nutmeg (for woodiness), cassia bark (for warmth), and Nigerian ginger, which is eight times as strong as the ginger you're accustomed to, and serves an important function, taming the taste of the alcohol. Where does the alcohol come from? It's 190 proof organic wheat grain alcohol from Syracuse and it's blended, not distilled, in small batches with the botanicals that are cooked as if you were making tea.

Sorel is quite versatile, served hot or cold, mixed with anything, from run to tequila, concocting a negroni, egg nog, lime rickey, sangria and more. Check out the recipes here. 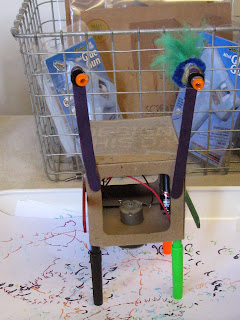 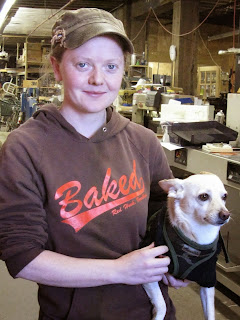 Maker's Toolbox
Sue Williams set up shop in the front section of New York Printing and Graphics, a business-to-business company on the first floor of a 19th century warehouse. (One of their machines is 50+ years old and it survived Hurricane Sandy.) Sue embraces the ethic that DIY toy kits are a way to engender creativity. Her robot kit, for example, teaches kids about circuitry and construction. So does the vehicle kit. In fact, she promotes that not only do you make but you also should repair your own toys. Talk about self sufficiency. Additionally, they try to rely on recycled materials. For example, the electric slide guitar is made from cardboard, wood and a tin can. 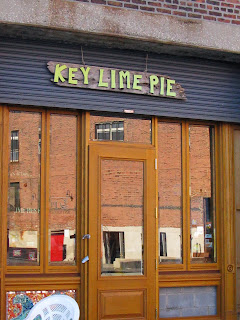 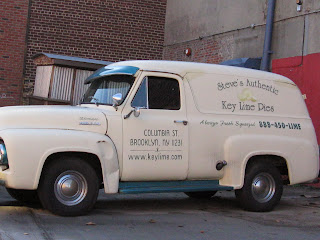 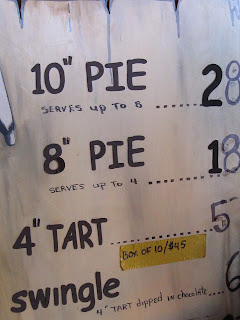 Steve's Key Lime Pie
As I approached the picnic tables striped with cotton-candy hues and the lime green painted Ford truck, circa 1953, that front the 19th century warehouse, I was more than skeptical that I was about to bite into the best key lime pie around. How could it beat what I considered the best key lime pie I found several years ago in the Florida Keys, not far from Islamorada?

I ordered an individual 4-inch key lime pie and a Swingle, an individual key lime pie that's been dipped in dark chocolate. (The term Swingle comes from the scientific classification of the key lime: Citrus aurantifolia Swingle.) The pie unswathed in chocolate was so perfectly tart and creamy that it was, by far, the best key lime pie I ever sampled. The Swingle was plenty decadent treat but I found that the rich chocolate so offset the pie's tartness that I didn't find it as appealing.


So how did owner Steve Tarpin, originally from South Beach in Miami, do it? It's all about the pure ingredients: graham cracker crust, a filling of condensed milk (not from a can), egg yolks and, most importantly, key limes that are freshly squeezed in house. 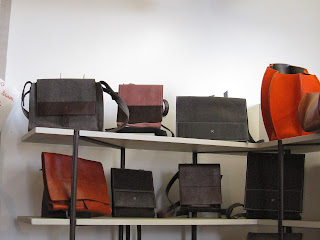 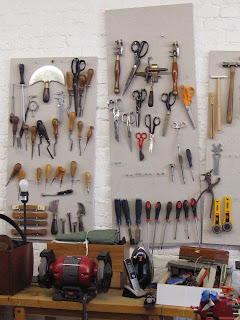 Alfred Stadler
The second-floor atelier and showroom of Alfred Stadler is chock full of his mostly leather creations. Exquisitely-crafted bowls, notebooks, handbags, slippers, iPad covers, belts, and bracelets are displayed on shelves and tables in the light-filled space. Hand-stitching, that he learned in his native Switzerland, is a big part of repertoire as is working with, aside from leather, cotton and felt, the oldest textile in the world. Alfred makes custom products and also offers classes where you could come away with a wallet or a handbag. 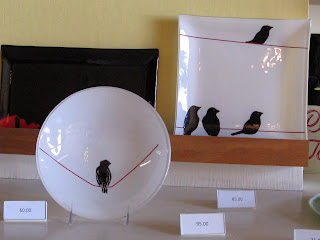 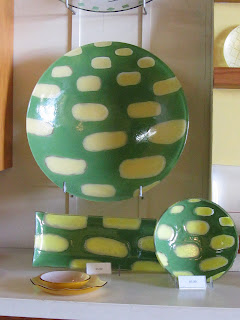 Flickinger Glassworks
In business for more than 20 years, Charles Flickinger is quite prominent in the world of glass design. Studying with prominent glass craftsmen -- Hanz Deutsch, Sydney Cash and Maurice Heaton -- Flickinger was involved in the restoration of the Statue of Liberty's torch in 1984.

The front of Flickinger's factory -- he focuses on glass bending -- houses his shop where iridescent bowls, plates, decorative pieces are displayed on shelves and in glass cases.

In the rear are four ovens where he and his staff produce one-of-a-kind pieces for lighting, awnings, display cases, you name it. Designers and architects regularly pay a visit to this Red Hook-based factory to commission a glass prototype. The ovens, which are designed on site, are so efficient that they can bend glass in 20 minutes. No wonder, considering the temperature rises in one oven to 1,200 F. Right now Flickinger told me he's working on the U.S. Naval Memorial, creating bowls for a Pasadena library, and a canopy for a private client in Brooklyn who wants it to replicate the Ritz in Paris.

The quality of the raw materials and the workmanship is impressive. Flickinger stocks molds from the 1830s; sources glass domestically as well as from Vietnam, Germany, France and other countries; and hand bevels and polishes every piece 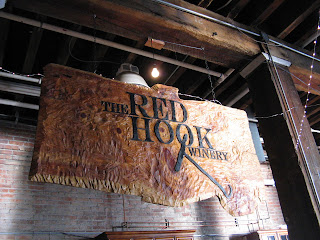 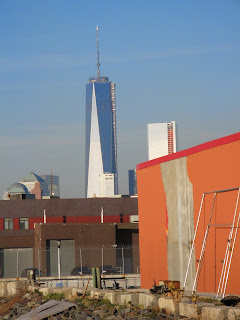 The Red Hook Winery
Housed in a building from the late 1860s, Red Hook Winery couldn't have picked a better venue to do wine tastings. Tall windows look out to the waterfront. Well, the venue was great until Hurricane Sandy hit, pouring almost five feet of water into the winery, submerging the barrels, and plunging the establishment into darkness for 12 days.

But, like all the establishments in the neighborhood, the family-owned Red Hook Winery is back in business, relying on grapes from 15 different vineyards in New York state. All are crushed in the rear of the building, where the wide doors open to picturesque views of the Statue of Liberty and the new Freedom Tower.

Interestingly, the two Napa-based winemakers have very different styles. Bob is more traditional, relying on commercial yeast and stainless steel tanks, while Abe, a former philosophy professor, likes a wild fermentation and French oak. The winery likes to see the contrasts in wine making styles and how this works with the various grape varieties. Displayed on the bottles in the light-filled tasting room, a griffin on the label indicates Bob's work while Abe's wine making is indicated by a sketch representing a Sir Isaac Newton theorem that an object in motion stays in motion.

Posted by J The Travel Authority at 10:47 AM

This is an awesome post regarding the Red Hook area! I do admit, I have one absolute favorite company that is listed above! That would be Steve's Authentic Key Lime Pies! Awesome pies, awesome digs and most of all Awesome Steve himself! Steve, you rock! Hope to go on one of my cross country trips in the Spring so will stop by to see you again.

Hi Conde, I adore Steve's. Key lime pie is one of my very favorite desserts and I'm so happy to have found his shop. Now I don't have to hop on a flight to Florida to satisfy my craving for great key lime pie!