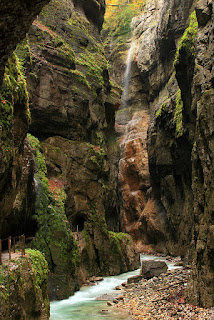 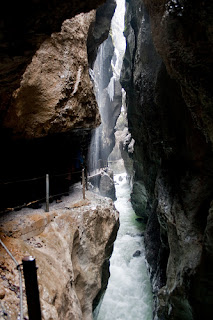 4. The Parnachklamm Gorge is really the best hike of the lot given that along the four-mile path you'll be walking through dark tunnels and across small footbridges along a rock ledge -- luckily, they installed a guardrail of sorts -- positioned above a cascading stream that's snuggled at the base of a sheer-walled gorge. It's a national monument that's full of sensory pleasures: you'll become wet, thanks to the tumbling waterfalls that you pass behind. Then gaze about and you'll see a window of azure blue sky above while the spray coming off the cascades provides colorful reflections of the broad bands of sunlight that penetrate this deep slit in the earth.

Posted by J The Travel Authority at 11:43 PM

What a gorgeous hiking area. These Bavarian hikes would be perfect for an active boomer like me - I'm a fan of the easy-going approach.

Hi Donna, I think you'll really enjoy these hikes. They're all oh-so-scenic.

These sound fantastic. I am often so focused on the "tourist attractions" while traveling that I forget that the natural landscape is an attraction all its own.

A cousin of mine moved to Bavaria, so the chances of my going there just increased. I will note down these hikes. They sound amazing.

Bavaria is so beautiful. We didn't have a chance to hike while there, but our daughter had her wedding in the countryside. It was awesome!

Hi NoPotCooking, It's funny that I'm the opposite. Everyone I'm traveling with heads out for sightseeing and I put on my day pack and veer towards the mountains.

Hi Alexandra, That's so cool that you'll have a great reason to visit Bavaria soon, perhaps. Hope you enjoy it and have a chance to check out even one of these hikes.

Hi Living Large, That must've been wonderful to have a wedding in such a bucolic landscape.

What stunning landscapes! The next time I'm in Germany, I'll tear myself away from the beer gardens to do something like this. Healthier, right?

Hi Ruth, You're funny. But I always seem like the odd person out when I tell the locals that I don't like beer. Go figure.

Oh my, what gorgeous photos. I would LOVE to hike this area.

Hi Jane, Wherever I travel, hiking is one of my first priorities. Glad you enjoyed my post.

I love to hike - and these hikes look like they are beautiful and fun. Too bad hiking boots take up so much room in your luggage, though, huh? Perhaps I;ll have an opportunity to visit Bavaria some day

My word, those photos make me wish I could go there immediately. What a terrific outdoor trip. My husband would LOVE it!

Hi Sheryl, What I do with the hiking boots is wear them on the plane. Then I pack a pair of sandals and a foldable pair of Mary Janes. And it all goes in my carry-on - no checked luggage.

Hi merr, Thanks for your enthusiastic comments. I always try to include outdoor adventures on my travels. Hoping you and your husband can check out any of these hikes if you have a chance to visit Bavaria.

I always wear my biggest pair of boots on the plane too - it's a minor inconvenience through security, but completely worth avoiding the hassle of checked luggage!

Hi Casey, That's cool that you're part of the savvy packing club, too! Wearing the bulkiest pieces of clothing on the plane is the way to go to avoid checking luggage and all the fees attached to that.

Wow, what amazing pictures. The philosopher's trail would be my first pick just for the name alone.

I am so excited for my European vacation in the spring of next year. So much to see and do!

Hi MyKidsEatSquid, The Philosopher's Travel is one of my favorites, also.

Hi Steve, If you need any suggestions for your Euro trip in 2012, don't hesitate to contact me. Have a great time.

Hi Lewis, If you love nature like I do, Bavaria couldn't be more perfect. (Plus, they have great pastries.)

These look like great places to go for an easy hike while exploring the beautiful nature in Bavaria. The Parnachklamm Gorge especially looks exciting with its dark tunnels and cascades.