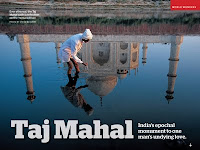 I could go on, but I'll let you experience these 50 great places. You won't be able to take your eyes off the images and the words. As a travel app that stimulates your mind and warms your heart, it doesn't get much better than this.

Posted by J The Travel Authority at 11:30 PM

Sounds amazing. I've read books like this from Nat'l Geo, but an app is great!

Hi NoPotCooking, Yes, it was amazing. I couldn't put it down. The images are mesmerizing.

Neat. I don't have an iPad, but I shared your review on FB for friends who do.

Hi Roxanne, Thanks so much. I appreciate that. Your friends will love it, for sure.

Sounds totally gorgeous, which of course I would expect from NGT. I don't have an IPad and don't even get many apps for my Blackberry smart phone. This post opened my eyes to a different way of looking at apps, as I have always thought of them as practical, while this is definitely there for the entertainment value.

Hi Vera, Well, it's certainly entertaining but it also has educational and, I feel, practical value in that it would inspire you to plan your next couple of trips.

It's amazing how technology is allowing us to experience destinations in new ways. Thanks for sharing this review!

Hi Susan, I agree. The iPad presents some fab possibilities. What a great way to revisit a destination or plan for a future visit. (Or even perfect for armchair travelers.)

I am sooo close to getting an iPad. Here you have yet another reason why having one sounds so cool!

Hi Merr, Oh, I definitely think you should buy it. The iPad is light, fast, has a powerful battery. You'll have books, games, videos and more - all perfect for keeping you busy when you're trapped on a plane. And to think that you can download this educational NatGeo app for $1.99!

This definitely sounds like the travel app to have!

Thanks for the recommendation... I just picked it up! Awesome!

Hi Living Large, Definitely. It's one of my favorite travel apps.

What a great app. I'm jumping on this one.

Hi Ruth, Hope you enjoy it as much as I have.

This sounds like an amazing app. Maybe it'll even get me out of Michigan some day. Plus now I want an iPad more than ever.

Hi Jane, I think this could provide a lot of motivation to buy an iPad ASAP.

oooh, I see an iPad in my near future, and my husband is going to flip over this app. A great gift for him!

Hi Casey, He'll be thrilled with the iPad and this app. Great gifts.

Yet another reason to covet an iPad. I am not much of a techno junkie but I am fixing for one of those babies with Flipbook. Great way to bring the world to you.

Hi Sarah, it's hard not to love an iPad. There are so many apps for fun, entertainment, education and to help with work -- today's NY Times had an article how it's great for photographers and writers.

That was one amazing way of bringing the unreachable places next to our eyes. That's for sure a great application to use for.

What a great post, is the app avaliable for iPhoneor is it just iPad?
abstract canvas

HI Travel Jobs, Yes, NatGeo sure does a great job with that. Very eye catching.

Hi lever559, It's also available for the iPhone, I believe.