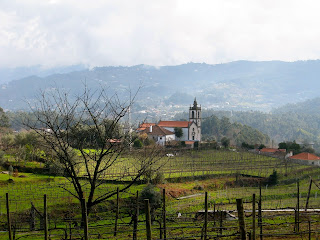 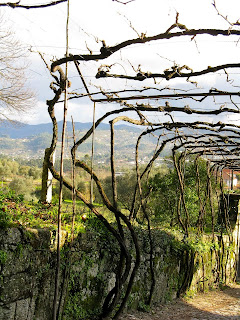 Sure, it's hard to explain how these unorthodox methods work. But Vasco is producing wines that maximally reflect the region's terroir. I'd be delighted to visit this vineyard and taste any of these wines again. Anyone who is interested in a wine tasting at this quinta needs to call to make a reservation in the summer only.

Posted by J The Travel Authority at 12:43 PM

I've never heard of biodynamic wine - what an interesting idea!

Hi Marthaandme, I know, super interesting and curious. The idea of biodynamic farming is a very big movement.

I am dying to go to Portugal. If I ever get there, I want to visit this winery - sounds amazing!

Hi Peggy, You'll adore this and so many wineries in the Vinho Verde region. They're producing some really fine wines that complement the cuisine.

Thanks for sharing all this fascinating information on wine production and the winery's name. My husband and I loved Portugal, which we have visited twice. I only wished we had had the time to travel north from Lisbon into wine country. We always order Vino Verde, if possible, in summer with fish. Lucky you to be able to travel through the Portuguese countryside this way. I'm so envious!

Hi Alexandra, It's interesting that I'd never tasted Vinho Verde before I visited the region. It's cool that you are well acquainted with this wine. I'll be sure to ask my local wine shop to order it so I can have a few bottles in the house this summer.

Fascinating subject, but I must say that you've been traveling too much when you think that 17th century houses and 100 year old trees and wine country since the Roman times is "ordinary." ;-)

Hi Vera Marie, I love your sense of humor. But I definitely see what you mean. I guess I've become accustomed to visiting centuries-old houses and Roman ruins on my travels. Thanks for your comments

I didn't know biodynamic wine... and i live here in Portugal. Very interesting!

Hi Celia, I know. How surprising. Apparently there are only three biodynamic wine producers in the Vinho Verde region and no others in the rest of the country. Very interesting.

Portugal is high on my list of places to visit...now I can add this biodynamic vineyard to the itinerary.

Even though I don't drink wine, I think the view looks well worth the trip! Just gorgeous.

Hi Sarah, I think you'll really enjoy visiting this scenic region, including the locale where I found this vineyard. Just make sure to call first for a tasting reservation in the summer because, unlike the other vineyards, the stone dwelling is a family home and they're only around in the summer.

Hi MyKidsEatSquid, You'd definitely enjoy the views as you drive through this Vinho Verde region and especially from the hilltop vantage point of Afros.

Thanks for the introduction to bio-dynamic wines. You've described a fascinating concept. The northwest area of Portugal looks lovely from your photos and reminds me that I'd like to explore Portugal.

Hi Donna, Yes, the whole idea of bio-dynamic production is amazingly interesting. This was my first visit to the NW region of Portugal. I hope to return. There's so much more to explore.

Looks like an incredible destination. The pictures are incredible and the descriptions are amazing. I love vineyards, wine, and everything associated with them. Very cool to read about bio-dynamic wines. Thanks for sharing... Wish I could tag along on many of your trips!

Hi Name Tags, So glad you enjoyed the post. Visiting vineyards and sampling wines is definitely one of my favorite things to do when traveling. And the bio-dynamic place was one of the highlights of the trip.

Great you are showing the best spots of Portugal! And the best of wines! two thumbs up!

hi flavio, thanks for your comment. It's amazing how few people know about the Vinho Verde region. Hopefully this post will give readers just a hint about the wonderful wines the region offers.

This region really caught my attention too during my research on geography for my thesis. Good post!

Would LOVE to take a tour of the region - always up for a wine tour :)

Hi hotel bedding, I love including a wine tour when traveling. It's a great way to learn more about the land and the culture.

hi. you gave me a very important information! i will go in Portugal this summer...and...i'm very happy to read this post! i will follow your advice...! In add I would to visit all of Portugal...expecially Algarve..! you know this place? My friends told me that it's very fun the Algarve tours...you know it? what do you recommend to me?

Hi Elen, I wonder if you made it to Portugal this summer. If you did, I'd love to know if you made it to this vibrant wine region? I've blogged about the less-touristy parts of the Algarve, the southwest corner, and hope you had a chance to check that region out too.

Thanks a lot for your great blog, I feel like I know this place so much better!