So many people visit Kas, a lovely but well-visited seaside town on Turkey's Mediterranean coast, for the handful of pebbly beaches. But I came for more active outdoor adventures, including checking out a mini section of the Lycian Way. This is a long-distance, 300-some mile path that follows old mule tracks and foot trails that meander through a land once ruled by the Lycians, an ancient civilization that was eventually conquered by the Romans. 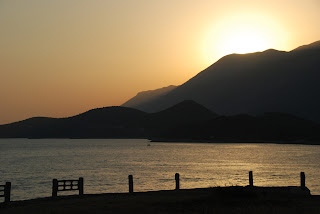 The Lycian Way passes through Kas, making it perfect for a half-day trek including lunch on the waterfront at the end. The path is well marked (white/red rectangle on trees, branches, rocks) and I could've easily done the trail on my own. But it's so much better to have a guide who points out interesting archeological or historical features along the way. Dragoman is a reputable adventure tour company in Kas that offers an array of activities, including sea kayaking, diving, cycling and hiking. 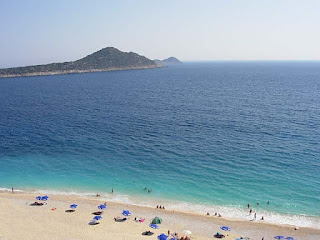 My guide, Kevsar, provided walking sticks, a hat and plenty of snacks to nibble on the way. She mentioned that the trail can be done as a loop: one way follows a path that's narrow at times along a cliff ledge where catacombs are visible in the rock face. The other way is more interior. Curiously, as soon as we hit the trail, a shaggy little terrier decides to become our mascot, literally following us the entire way. The dirt path quickly became littered with rocks and boulders as we progress along the trail that provides plenty of ocean views -- the colors of blue and green seeming to change by the minute. We spot Hidayet Bay, a great diving site with shipwrecks to explore. Dense maquis, often fragrant shrubbery and short trees, lined our path and was so thick at times that, without my guide I would've never have spotted the ruins of an ancient town. She pointed out an old stone well, a one person tomb, even an area used for grinding olives and then storing the olive oil. 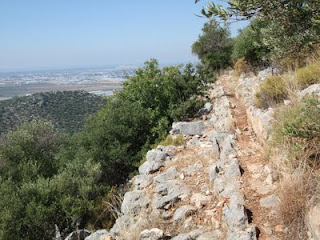 In the morning heat, we rested under the shade of an olive tree eating some of the cherries from her garden that she packed. Then it was back to the land of boulder hopping as the trail barreled straight down to the sea. After so much silence on the trail -- the only sounds was that of a falcon -- I knew we were close to our destination (Liman Agzi Bay) when we could hear children frolicking in the water.


Unlike Kas' other beaches, this one felt like a well-kept secret. There were few people perched on the pebbly swath. Two small fishing boats were anchored offshore. And a low-key cafe/restaurant, backed by olive trees, sat right along the waterfront. They offered fresh grilled sea bass in an unspoiled setting with the occasional small yacht couldn't be beat.

I had walked briskly to this beach which took just over an hour from Kas so I had plenty of energy to spare. Before ordering lunch, we made our way along another trail to the Don Quijote beach where I found a cozy bar with comfy couches set on stilts right on the beach -- and all shaded by palm leaves. Another place I could've hung out for a few hours. But we continued on to Hidirellez Cave where a precarious set of steps led deeply down into the darkness where my guide said plenty of bats abound.

Back at the cafe, we spent plenty of time sampling their fresh salads and bread along with the fish and then strong Turkish coffee. My guide told me this is her favorite beach in the area. No wonder. It's hard to pull yourself away from so placid a setting. But we did. And, rather than doing the loop -- since I had plenty more things to do in town -- we hopped a petite fishing boat taking us back to Kas. For quite awhile I stared at the sheer rock faces where a couple of catacombs were once carved. Traces of the ancient people who walked these lands.

Hi Cloudbuster, Thanks so much for visiting and I'm so glad you love my blog. Hope I can provide advice that's useful for your travels.

Gorgeous! I don't have ANY plans to go to Turkey but I hope one day to be able to hike this path.

Hi Jennifer, Glad you enjoyed my post. I'd love to do a multi-day trip on this amazing path at some point. Hope you get to visit the area on one of your trips.

Hi,
This is a nice trip report of the trek. I am trying to put up a website about people's experiences in Turkey. Would you be interested in publishing this article on my site with a referral back to your blog. Let me know what you think. You can reach me via info@iwasinturkey.com
onur

Hi Onar, glad you enjoyed my post. Sure, I'll email you about publishing the article.