Istanbul -- Some of My Fave Spots

The Blue Mosque and the seem to get all the tourist attention, certainly for good reason. But on my latest trip to , I searched out less popular venues or at least venues that are not tourist meccas.

• Sure, the Grand Bazaar attracts the masses that are searching for the best deals on carpets, souvenirs and knock-off brand-name goods. Instead I browsed the quieter Bookseller's Bazaar and the Old Bedesten section of the Grand Bazaar where I found a 10th century Koran, antique firearms and 18th century urns. And the Spice Market had a very authentic feel. Here, the city's top chefs browse tall pyramids of spices. I even found shops dispensing herbs the way pharmacies fill drug prescriptions. Here you could get potions to treat all manner of ailments, from high cholesterol to asthma.

• While the Blue Mosque is jammed with visitors, Suleymaniye, a 16th century mosque, is as peaceful as can be, at least when I visited one morning. Here, you'll find ornate tile work in the interior and exterior. I spent quite some time sitting in the placid central prayer room that's lighted by a couple of hundred windows. 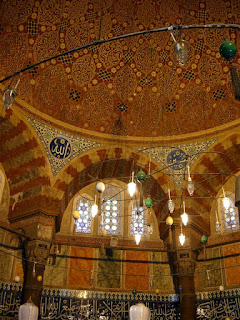 • The sits along the Bosphorus making it a perfect location for fabulous views from their restaurant. They're noted for their pizzas and pastas, including the spicy tagliatelle with shrimp and clams (that's what I ate for lunch). I love modern art and found that I could've spent a couple of hours browsing the extensive collection of contemporary Turkish paintings, sculpture, photography and video installation. I particularly liked the works of Nazmi Ziya, an impressionist painter, and the sufist images of Ergin Inan.

• Two additional museums that I wished I had more time to explore include the Santral Museum, considered one of Istanbul's best art galleries, and the Sakip Sabanci Museum, housed in a mansion that's set on lovely sloping landscaped grounds. The latter is renowned for its calligraphy collection. • Don't just spend your time on the European side of . The Asian side is a must-visit, including Kadikoy where the ferry docks. There I lunched at Ciya, a restaurant serving southern Turkish cuisine. The stew with red cherries was unusually flavorful as was the dried eggplant stuffed with meat and rice. From here I walked to the quieter Moda neighborhood with its narrow lanes, atmospheric cafes and historic buildings.

• I was surprised by Istanbul's array of coffee shops, cafes and bars that provide a quiet respite from the hustle and bustle in this city crammed with more than 12 million people. Interestingly, some cafes are in courtyards so lush that I almost thought I was transported to the country. Others are high above the chaotic traffic. For example, the White Mill Cafe has a shady courtyard on the second floor where I found plenty of people working on their laptops. The upper level of Kahre-6 has a top floor garden with a tiny fountain. My favorite was Limonlu, a cafe with a tree-draped patio where birds twitter. Interestingly, this cafe is accessed via a nondescript building and a dark set of stairs that look like they're leading to a shadowy basement.

• My favorite views were found at 360, a restaurant and bar that's appropriately named for the panoramic views. They may have the best views in the city. And another restaurant-bar with fab views is Leb-i Derya with its floor-to-ceiling windows and skylights. Both venues are very fun night spots.

• Sofyali is a restaurant that's also a popular raki spot. Raki is a grappa-like beverage that's usually served on ice. But it's not all about drinking here. This is the place for mezes, the Turkish appetizers. Here I found wonderful haddock with red pepper, potato puree with green onion, and purslane mixed with garlic and yogurt.

• It's hardly all about meat in . I found some amazing vegetarian restaurants, such as Zencefil and Sebze Lokantasi where I dined on quiche with artichokes and a cold yogurt soup, and the most amazing slice of pumpkin pie.

Posted by J The Travel Authority at 2:19 PM

These places look amazing, especially the mosque (I guess in Turkey non-Muslims are allowed into mosques? In Muslim West Africa that is usually not the case).

Your posts always make me sigh and think, I hope to go there someday!

Thanks for the information, Jeanine. I think it will be very useful for me.
Ramón

I have noted your suggestions for a future trip abroad. My husband has always wanted to go to Turkey, so I expect we will make it there fairly soon. Thanks also for the vegetarian restaurant tips. Vegetarian restaurants are sometimes so hard to find!

I also recommend the Ataturk Museum. It's too worshipful and airbrushed -- but that, too, makes it fascinating, as you try to mentally fill in what's been left out.

Wow - looks like an interesting and wonderful place to visit. Thanks for the great info!

Hi Meredith, You could spend weeks in Istanbul and still not see everything.

Hi Jennifer, I found that you can visit the mosques in general as long as it wasn't during the call to prayer done five times a day. There may be exceptions to this, though.

Hi Martha and Me, Thanks so much for your kind comment. If you ever need any travel help on Istanbul, don't hesitate to ask me.

Hi Alexandra, Yes, finding the veggie restaurants was a real treat, and an unexpected one at that especially given the high quality of the food.

Hi Ruth, thanks for letting me know about the also recommend the Ataturk Museum. I'll have to check it out next time I'm there.

I just found your blog and want to invite you to join our exclusive Localyte network at no cost. By quickly embedding Localyte’s new widget in your site, you can immediately offer value to your readers.

I’ve built Localyte into an active community of over 30,000 local experts around the world who answer travelers’ questions for free. When travelers ask a question, they get an average of five personal responses from locals who share tips and secrets on their home towns. The travelers return again and again to read these responses, creating a unique opportunity for us to promote other products and services related to their destination.

With the Localyte widget on your site, you can also participate in 50% of the revenue we derive from your visitors who ask questions. And your visitors will never have to leave your website to ask their questions. That's it. It’s completely non-competitive and delivers great value to your readers!

If you’re interested in our widget, please just click http://www.localyte.com/getqwidget.php to go directly to the signup page.

This is an invitation-only offering, so please do not forward this to anyone else. However, if you know a friend that might fit well into this concept, please email me at guillermo@localyte.com with friends' names and emails, etc. and I'll reach out to them if there's a fit.

Istanbul is my dream vacation, and this just makes me want to make it come true all the more!

Hi Jen Haupt, Thanks for visiting. Hope you can plan a trip to Istanbul. And I hope my blog posts help you enjoy the trip even more.

I love, love, love Ciya! I could eat every single thing there!

And thanks for the gallery recommendations. I really liked the Istanbul Modern, and hope to check out some other art-scene stuff next time...

Hi Zora, So glad that you know all about the wonderful delicacies served at Ciya. When I return to Istanbul, I hope to eat there again. Yes, the Istanbul Modern was one of my favorite art venues in the city. You'll love the other galleries and museums as well when you return.

What a lovely place, Istanbul is the place!

This article will definitely come in handy for my upcoming trip to Istanbul!

Hi Meredith, Excellent. If you have any Istanbul related questions, don't hesitate to ask.