Despite visiting Portugal once or twice a year for quite some time, I've always avoided the Algarve because, as you know, I'm interested in what I call "hidden treasures." And things just didn't seem so hidden there. But having visited the Southwest Algarve, I discovered what is referred to as the "other Algarve."

The base for my visit was the Monte Velho Nature Resort, a true hideaway with plenty of comfort and no attitude. In fact, the vibe here is so mellow and welcoming, that I wished I had at least a week to more fully enjoy the property. If any place would turn me from a type A New Yorker to a tranquil type B, this would be it. 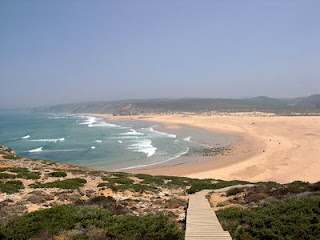 The owner, Henrique Balsemao, is a former publisher and TV producer who sets the tone for the low-key vibe here. He's a committed surfer and yoga aficionado who's in love with barnacles -- catching them and eating them. You can't get more interesting than this. (If you've never eaten barnacles, by the way, you'll find these odd looking creatures to be both succulent and sweet.)

Both the public rooms and guest suites are decorated with artifacts and furnishings from around the world: bold art from Brazil, rugs and couches from Guatemala and Morocco, creative sculpture and paintings (all those in the lounge are for sale) from local artists, even a sculpture of a Hindu god in the dining room. It's an eclectic mix that works.

During my stay I enjoyed one of the best sports massages from a German physical therapist who studied Ayurvedic massage in India. (He used some "secret" oils and Indian herbs on my overuse injuries.)

The next day began early with a relaxing yoga session in a gazebo facing the rising sun high on a hilltop above the sea. Then, it was a leisurely breakfast while sitting under a pergola draped with colorful bougainvillea and watching the horses graze. (Henrique also has several donkeys that children can ride.) 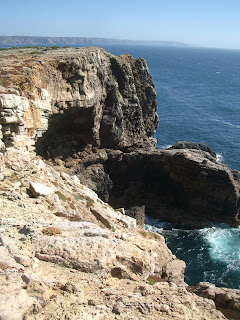 The outdoor hammocks and rattan deck chairs from the Philippines were certainly seductive. But, since I'm all about being active, instead I did a five-mile hike along the coast that also wandered through a shady pine forest, all not far from Carrapateira. During my trek, I walked past Henrique's favorite beach, Bordeira) where he surfs. Interestingly, he finds it better than being in Bali where it's hard to be alone on the sand or in the surf. 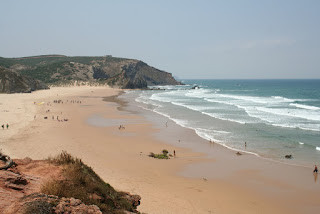 If you want to try out the surf board, Henrique will set you up with lessons at the surf school. Or you can mountain bike on off-road trails. They've also got a one-week yoga retreat and on Saturdays in the summer you'll be able to enjoy a Moroccan buffet in the evening or even belly dancing.

This is the Algarve I never knew.

Posted by J The Travel Authority at 2:31 PM

I have been in Monte Velho as it is absolutely gorgeous. All the beaches in the Coast are empty and lovely. The area is also great for a bike ride.

Hi Terracotta Journeys, Glad you had a chance to enjoy Monte Velho and the beaches in that area. I can't wait to return. What a paradise.

Looks amazing.I hope I have a chance to check this out someday!

I went to the Algarve for the second time about 4 years ago. It was March, so it was lovely and tranquil.

Nice to know it still has some quiet spots.

Hi Jennifer, If you decide to venture to this part of the Algarve, please don't hesitate to ask me for additional insights.

Hi Christie's Corner, Yes, I'm glad to find a relatively untouched part of the Algarve that maintains its wild side.

What a wonderful post, looks lovely there and really need to get there soon.