On my recent visit to Portugal I found plenty of new goings-on, especially in Lisbon, one of my favorite cities in Europe. What was especially lovely was observing how the Portuguese dive into the ultra-modern design and culinary scene head first, while still maintaining their roots in their centuries-old traditions.

I'll be posting quite a bit on Portugal in the next few weeks. This is the first, representing just one day of discoveries.

I'm very much a fan of creative design concepts and I wasn't disappointed at Lisbon's new Internacional Design Hotel where I stayed. An artistic touch suffuses everything in this hotel that's housed in a building dating from 1899. In fact, the thinly-sliced fruits standing on edge were so captivating that I couldn't help staring at the breakfast buffet. The multi-shaped cereals were even served in shot glasses. You gotta love this. Quotes from Alice in Wonderland rolled past me as I climbed up in the glassed-in elevator. And this is truly a wonderland, with four guest room concepts: tribal (zebra details), Zen (bamboo and quotes from Suzuki), urban (graffiti) and pop (think Warhol). (Since I"m a fan of all things Asian, It was lucky that my room was on the ever tranquil Zen floor.) My favorite color -- purple -- tinted many aspects of this hotel: I found the reception staff wearing purple bow ties, while the banisters were lit up with purple lights. The bathrooms are no exception to the wild and the wacky: toilet paper comes in orange, chartreuse and black hues.

For lunch I chose Sommer -- where coincidentally orange colors perfused the interior -- a restaurant that opened last year. This is a perfect eatery for those who want fast but fab food. In fact, that's their specialty: they can serve a salad in three minutes, a pasta or risotto in five and other hot dishes in 10 minutes. The traditional easily mixes with the more contemporary fare: on the menu you'll find a fine pear soup (hardly traditional) along with a baked chicken served with a traditional farinheira, mashed potatoes and apples. I chose a salad with moist strips of duck breast and drizzled with a marinate of figs and port wine. The most popular dishes are the risottos, such as the one featuring spinach and beans. 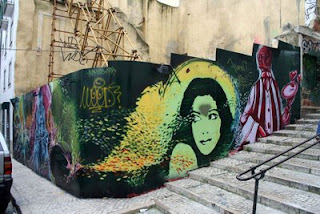 For a perfect afternoon refresher, stop in one of three gazebo-like kiosks -- Quiosque de Refresco -- serving traditional food and beverages that were once popular in the 19th century. I hung out at the venue positioned in Camoes Square (great for ultra people watching) and sipped groselha -- a tasty sugary red berry syrup that's mixed with water, and munched pastel de feijao brasao, a moist bean and egg cake. The two other kiosk venues are in Jardim de Principe Real and Praca das Flores.

I certainly have a thing for vibrant colors and they were on full display in the just opened Allarts Gallery where most of the works are produced by naive or unprofessional artists from, aside from Portugal, Brazil, Finland, Turkey, Argentina and Italy. The works will change every couple of months or so. My favorites were the lavender fields of Sema Culam from Turkey as well as the moonscapes by Lena Koski of Finland. 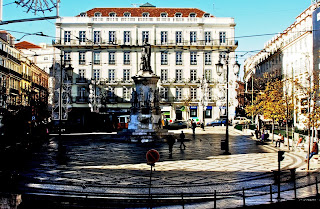 No wonder my taxi circled the Chiado neighborhood for a good 30 minutes before he found the location of Cafe Fabulas. The restaurant sits along a long set of pedestrian-only stairs where clearly no taxi can navigate. It's a good thing I didn't give up looking for this venue because I would've missed being transported to another century once you enter the network of rooms with vaulted ceilings, archways and rough stone walls. It feels like part art gallery, antique shop and comfy/cozy eatery in someone's ancient home. The walls are bedecked with black and white photos of scenes from old movies, candelabras abound as do tables topped with old sewing machines. I settled into a tiny alcove and enjoyed a grilled goat cheese sandwich with tomato and basil. To finish off a day of discoveries, I nibbled on the yummiest dessert: strawberry slices marinated in mint with a mango sauce and topped with a melted white cheese.

These are all experiences that make a trip to Lisbon unforgettable.

I'll be visiting Lisbon in the fall of 2010. Thanks for the resource list. I'll be sure to use it.

Hi Donna, Glad I could be of help. Keep a look out for more postings on what's new in Lisbon. Hope your trip in 2010 is a fun one.

I have only visited Lisbon once, years ago. It was such an awesome city then. I can only imagine it's even better to travel to now!

Hi Jennifer, Thanks for commenting. You'd have a great time if you decide to return to Lisbon. So many new shops, galleries and restaurants. Yet the city retains its lovely traditional roots.

Wow what a great post, I'm glad good things are going as I'm due to be going to Lisbon soon!