Dealing with Blisters when Traveling

Blisters can ruin a hiking trip. That’s what almost happened to a friend of mine who tackled a 10+-day hike in northern Spain. He developed a very large blister on the sole of his foot. I ended up giving him blister tips via WhatsApp that allowed him to complete his trip with minimal discomfort.


Basically, once a blister forms and becomes quite large, it needs to be pierced, so that the fluid can drain. However, he was doing this with a sterilized needle, but it wasn’t working. I determined that the reason was that the gauge of the needle was too small to allow adequate drainage. And also that a callus formed over the blister as he repeatedly hiked on it day after day. (It was the body’s way of protecting the skin.) I suggested he find a pharmacy that sells manicure supplies, including a small cuticle clipper. Then, after adequately cleaning the skin with soap and water and also cleaning the clipper with alcohol, he could ever so gently make a nick in the side of the blister, which would allow the fluid to drain. He did this and it provided some relief but there was still pain -- from the overlying callus tissue. So I suggested that, again, after carefully cleaning the skin and the clipper, he gently attempt to debride the callus to reduce its thickness and size. After that, he would need to protect the area, either with a little foam donut or with a gel pad, such as Compeed, or with a dab of Aquafor. And this all worked!


My advice for blisters is to prevent them from getting getting so large. When I find a hot spot on my foot, I immediately apply Aquafor to reduce friction. And to prevent blisters in the first place, I wear Merino wool socks that wick away sweat and that have no seams nor do they bunch up. Two companies that I love are Smart Wool and Feetures. 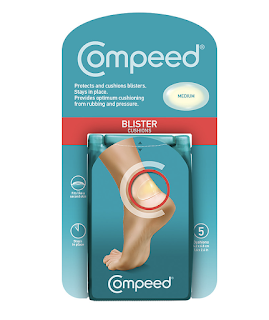 Posted by J The Travel Authority at 10:03 AM