Standing on the corner of Third Avenue and 38th street -- a part of New York City I could call my virtual home -- I stared at a curb sign declaring “Sons of Thunder” with an arrow pointing east on 38th. It was barely 9 am and I hesitated following the arrow, wondering if this was some after hours club that forgot to take down their sign. (I hadn’t bothered to read the rest of the sign: poké.)


For those not in the know, poké is the ubiquitous Hawaiian thickly sliced, raw fish side dish that’s typically served atop rice with a soy-based or other sauces. It can be found anywhere and everywhere on the Hawaiian islands, from convenience stores to gas station markets.


That morning, I ended up circling the neighborhood, doing errands, and, intrigued by the curb sign, made my way back to 38th Street where I met John and his brother James, the delightful owners of Sons of Thunder, a name referring to a childhood nickname for the brothers.


James told me, “The idea for the restaurant was for it to be like a Hawaiian beach shack serving burgers, and chili dogs; poké would be a special." (The Hawaiian theme is a result of their grandparents emigrateing from South Korea to the U.S. via Honolulu; much later the family moved to San Diego.) But because of an unforeseen problem with the gas lines, Con Ed couldn’t turn on the gas for awhile. That meant no grilled chicken, burgers or fries. So it became poké all the way. “It was a blessing. If we had had the gas, we would never have explore it,” said James.


Yes, the menu is limited for now, but it’s a yummy one. (You can choose from among salmon, ahi tuna, steamed octopus or tofu.) My favorite dish is the salmon tostada made with chopped sashimi grade fish, baby greens, avocado and chili dust served on a warm corn tostada  that’s drizzled with baja salsa. Another dish -- it’s not on the menu -- is a bowl of brown rice and house-made beef chili paired with edamame, diced tomatoes, warm cheddar cheese sauce, onions and avocado slices. (If you're really hungry or if you stop by with a friend, order both.)


The brothers are very much attracted to a green ethic. Their ice cream is organic and locally sourced. The salmon is shipped in from the Faroe Islands -- yes, you heard right, all the way from the pristine Faroe Islands [you gotta love these guys] -- where the fish is farmed sustainably in its natural habitat using no chemicals. They have one white and one red wine on tap -- I prefer the bright, red berry notes of the red -- from the Finger Lakes region of New York State.


Meat eaters clamor for the chili cheese dog -- you can ask for fresh jalapeno for an added kick; or the banh mi dog served with mayonnaise, cilantro and jalapeno.


I prefer eating in since light streams into this sparsely furnished, informal space, thanks to an immense skylight in the rear dining room.


If you’re in Midtown East -- or even if you’re not -- this is a restaurant worth checking out. Even without the grilled items, you’ll delight in the fresh food, the creative preparation and the hospitality of the staff. 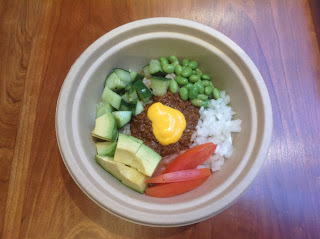 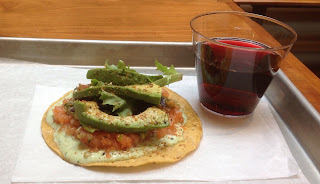 Posted by J The Travel Authority at 6:35 PM