So here I sit at my home in a New York City suburb where three feet of snow awaits just outside my door. Now three days post blizzard, the streets of the city are swirling in ice water, the bus stops are piled with five feet of snow, and the sidewalks are a slick, slippery mess. People slide and drop to the asphalt around me. But I jog -- yes, you heard correctly -- past ‘em. In fact, on the night of the blizzard when there was a travel ban, turning our frenetic traffic-laden avenues into desolate corridors, I chose to jog a couple of miles literally in the middle of Madison Avenue. Because how often can you do that and do it safely?


I managed to not only stay upright but move speedily down snowy, icy streets thanks to my new IceBug boots that have a special traction technology. (My boot model is the RYUMZ BUGrip.) The traction depends on BUGrip, a trademark name for the numerous (16 to be exact) carbide steel tip studs imbedded in the rubber outsole. The traction system is referred to as dynamic, meaning that it adapts to the surface and the amount of pressure your foot exerts on the ground. (Each stud is acting independently. How cool.)


The boot is so light and comfortable -- it’s lined with fleece -- that it doesn’t resemble any winter boot I’ve ever worn. It rolls well as you walk or job, making it easy for me to stay fit in the winter. And it looks good -- as good as you can look when trying to withstand brutal conditions. I’ve worn them with Merino wool sweater dresses to various networking events and no one had a clue my boots had steel cleats. (They look pretty ordinary.)


I’ve tested the boot on asphalt, ice and snow and found it provided a completely stable grip. But, of course, once I walk indoors across varied surfaces like tile or marble, I had to either walk very carefully or take the boots off. (This is completely expected with steel studs.)


My boot is said to insulate to -4F. But, during the morning of the blizzard when I waited in a snow bank for more than an hour, not only were my feet not toasty, they were quite cool. Nonetheless, standing immobile in a snow bank may be an extreme situation for the IceBug insulating system. Under other conditions, the boots kept my feet comfortable.


As far as waterproofness is concerned, the boot is supposed to be 100% waterproof and breathable. And, while my feet didn’t sweat when I’m wearing them even for 10+ hours a day, there were times -- as I crossed a river of ice water on Park Avenue -- when my socks got wet. (It’s hard to say if the water entered through the slip-on opening or through the fabric itself.)


Despite these caveats, the IceBug now rates as my favorite winter boot. And, if the weather continues to be inclement, I may be wearing them until spring. 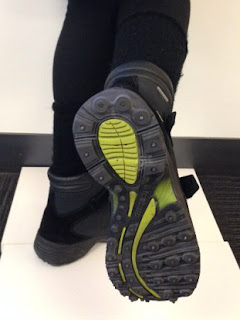 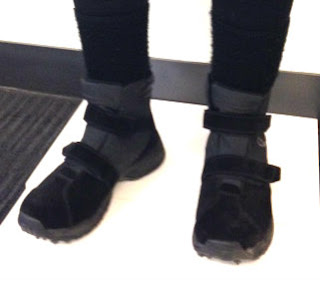 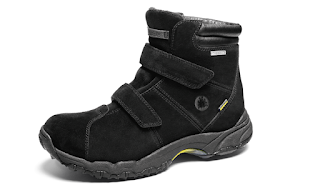 Posted by J The Travel Authority at 3:42 PM