A Historic and Tasty Walking Tour in Brooklyn

As a native New Yorker, I've taken a lot of NYC-based walking tours in the hopes of getting a different perspective about my hometown. But, by far, one of the best is the Brooklyn-centric tour company, Made in Brooklyn Tours, run by Dom Gervasi. I had taken his Williamsburg walking tour many months ago and found him to be enthusiastic, knowledgeable, organized and full of amazingly yummy tasting experiences that he introduced us to. 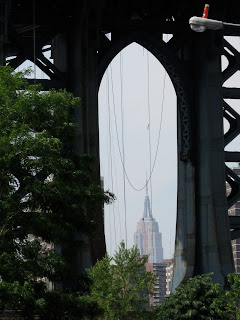 I'm hoping to eventually do all of his tours, but my most recent one was to the DUMBO neighborhood. I thought I knew this neighborhood but here are some of the fascinating factoids I learned from Dom: 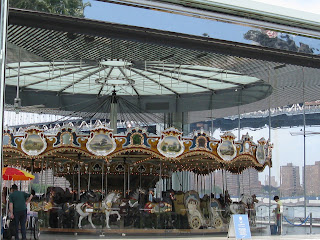 Artists in residence named the area DUMBO (for Down Under the Manhattan Bridge Overpass) in the late 1970s, hoping it would deter developers from encroaching into this waterfront landscape. It became their legacy. 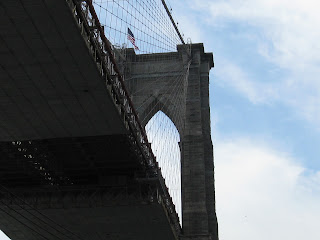 In the early 1900s in NYC, you couldn't start a pizza shop with a coal-burning oven unless the building already had one. Grimaldi's, where, in the evening, the lines stretch down the street, was in a former bank building that clearly came sans coal-burning oven. It got permission to build the oven only because it was a chain.

Brooklyn Ice Cream Factory - they've only got eight flavors. And their formulations are "American style", which means no eggs in the recipe. That's the old fashioned way of making ice cream at a time when there was no way to pasteurize egg yolks. (My favorite is the chocolate chocolate chunk.)

Finally NYC is making better use of its waterways in terms of ferry service between the boroughs. But it was Cornelius Dircksen who started the first ferry between Brooklyn and Manhattan in 1637. Unbelievably he charged the Native Americans double what he charged the Dutch.

It was Robert Fulton who ran the first commercial ferry service in 1814 when it was quite common for farmers and their cattle to make the river crossing every day. 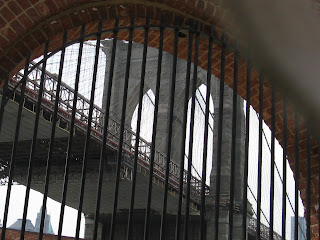 The men behind the Brooklyn Bridge suffered tragic fates: as John Roebling was inspecting the bridge, a ferry crushed his foot  He died of what was called lockjaw at the time, but we know it as tetanus. His son, Washington, took over and, after working in the underwater caissons that became the bridge's foundation, developed what was known as Caisson's Disease, aka "the bends." He was paralyzed for the rest of his life.

But it's not all about DUMBO's past that stands out on this tour: 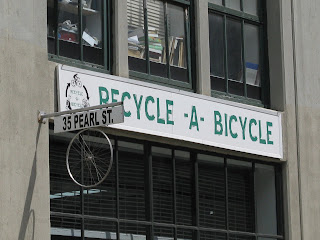 Recycle-A-Bicycle on Pearl Street was started as an outreach program by Transportation Alternatives as a way to teach kids how to recycle their bikes. Now 1,200 bikes are recycled every year. They train interns in Long Island City and teach kids through this internship programs. On Wednesdays, adults can help out in the shop and learn about recycling, too. 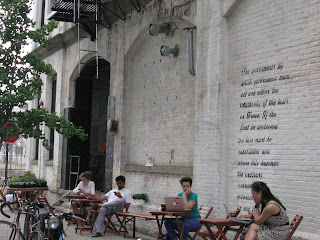 Beginning in the late 1800s, the Arbuckle family owned several buildings at the intersection of Jay and John Streets all involved with coffee roasting. They had a method of preserving the aroma of the bean by glazing it with sugar and eggs. One of the buildings now houses the Brooklyn Roasting Company that's all about being green: the coffee is organic, Rainforest Alliance, fair trade and direct trade. The beans are stored in steel canisters and the coffee is shipped by bicycle or bio-diesel-powered vans. Their cafe, that's adjacent to the roasting facility, is definitely worth a stop. Sit on the sidewalk in nice weather in one of the many folding chairs.

Mamselles Teas & Tarts is run by Jasmine who's an attorney by profession. Unlike a typical white-glove style tea shop, this one is casual, with teas coming from three purveyors, including renowned Harney & Sons. Choose one of the unique flavors such as blood orange, French super blue lavender, or evergreen mint. (The iced blood orange was refreshing on a muggy NYC afternoon.) And pair it with a savory Caribbean tart: pineapple with ginger and nutmeg; salmon and codfish; shredded chicken with spices; or cheddar with red pepper. They are all Guyanese style. 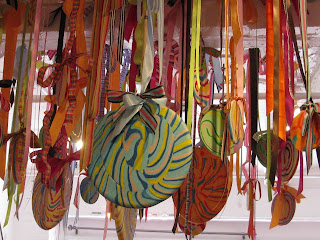 Dewey's Candy Shop stocks plenty of vintage-type and new items. The licorice selection is extensive as is the selection of chocolates with curious flavors that include edamame with salt,  classic hemp, and dark chocolate with sea salt.

Posted by J The Travel Authority at 1:11 PM