An Idyllic Walk In The Bronx: Old Croton Aqueduct

I guess you might say I'm obsessed with canals and similar  type waterways. Whether it's the Chesapeake & Ohio Canal that runs for 185 miles from Georgetown in DC to Cumberland, Maryland or the Kiel Canal in Germany, canals are perfect for the bikeable or walkable paths that run alongside these waterways. But, imagine my surprise when, as a native New Yorker, I just found out that there's a 40-some-mile-long aqueduct that wanders from Central Park to Westchester. But I probably would have still been unaware were it not for Open House New York. 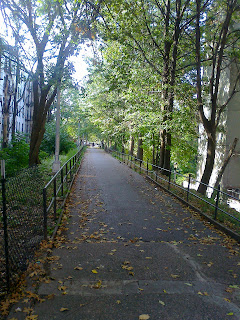 Open House New York is an annual event held one weekend in September with private residences, galleries and other (often architecturally-interesting) buildings opening their doors for culturally-focused activities. Because of my waterway fascination and tree hugging nature, I signed up for a walk along the Old Croton Aqueduct with guides from the Friends of the Old  Croton Aqueduct that's dedicated to preserving the Aqueduct.

Taking the #4 Lexington line subway to near the end of the line, I meet the group of 15 across from Lehman College where I pondered where this aqueduct was going to appear. The Bronx hardly sounded like it would be the source of an idyllic jaunt. Our two guides, Steve and Charlotte, warn us that, because we would be coursing south through the Bronx, if we were expecting sylvan glades we would be sorely disappointed. (The treks that head north through Westchester follow the scenic Hudson River Valley.) Interestingly, many trailheads are easily accessed by taking Metro North to, for example, Hastings-on-the-Hudson or Dobbs Ferry stations. 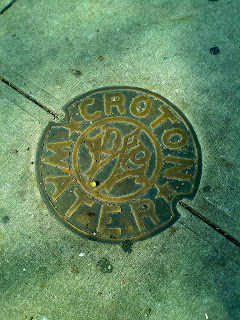 But what this Bronx section lacks in verdancy it's abundant in history, both social and literary. Coincidentally on this the anniversary of Edgar Allan Poe's birthday, we will be walking in his footsteps.

We learn that 10% of New York City's water comes from the Croton Watershed, which was the source of the city's first clean water supply back in 1842 when it first opened. We take clean water for granted but, before that time, New Yorkers got their water from wells which became contaminated and led to plenty of disease outbreaks, including typhoid. The aqueduct was able to deliver 50,000 gallons of water a day.
The entire aqueduct, however, is invisible to us, as it runs just five to six feet below the sidewalk along Goulden Avenue. It's said that 99 million bricks were used in the construction of the tunnel that carried water. (It's referred to as the Old Croton Aqueduct because the new one went onine in 1910 and the original ceased operation in 1955.) Curious factoids abound where this aqueduct is concerned, including that it was built by a self-taught engineer. The aqueduct, a marvel of construction, also owes its existence to the Romans who also build these structures to be gravity fed. 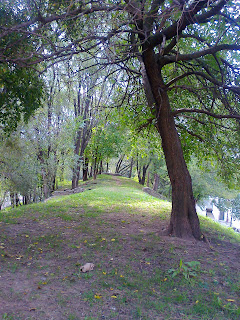 Passing drab apartments, whitewashed churches and ramshackle garages, we spot  the turret of the Kings Bridge Armory that dates back to 1913. (It was the largest indoor drill hall in the world.) Curiously, what some believe resembles a French chateau has been abandoned for decades. A mere quarter of a mile on Kingsbridge Road is where Poe settled, wrote some of his most loved works, including the Cask of Amandillado, and walked the same path we're following south to the High Bridge.
The most surprisingly lush section of the route is along Aqueduct Avenue where embankments (reflecting the topography of the aqueduct) fall away to either side of our path that's now dotted with shade trees. The Poe Cottage is a short detour away as is the little-visited St. James Church where elaborate Tiffany stained glass windows make it well worth the visit.

Near chaotic Fordham Road, we curve around to an adjacent pedestrian path, a wall of native field stone lining the way. Prominent tree roots penetrate the stone wall and even dig down to the aqueduct's roof, puncturing it and, saysCharlotte , will eventually destroy it.
Steve stops to show us a photo of Phineas Gage, one of the builders of the aqueduct, who survived after being impaled through the skull with an iron rod – the tragic result of digging the canal by hand, using black gunpowder instead of dynamite. (A handful of sand was supposed to prevent a spark after using the iron tapping rod.)

We wander into Aqueduct Lands Playground that's designed – as is the nearby Morgan Playground –  to reflect the aqueduct itself, including the towns along the way, their names – Dobbs Ferry, Tarrytown, Ossining, Hastings, etched on brick that rims a water channel. As we continue heading south, we pass the Gould Memorial Library, renowned for the Hall of Fame for Great Americans. (The scenic views of the Harlem River from this vantage point also can't be beat.) 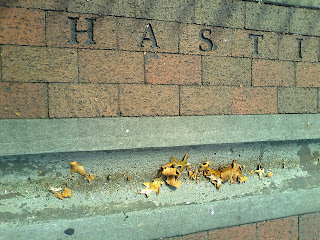 As we cross Tremont Avenue and continue on University Avenue, the walk dramatically loses its appeal with nothing but crowded sidewalks and drab storefronts. But, we press on to the highlight of the journey, the High Bridge that carried water across the Harlem River. From there, water was first pumped up to the elegant circa 19th century stone tower that dominates the skyline and then gravity took over to supply Manhattan. Decades ago, people would stroll this the oldest bridge in New York City. We gather in petite High Bridge Park and peak through a crack in the imposing chained door to see that the bridge surface is now overgrown with weeds. It's been long closed but the hope is that it will be restored and reopened as a cycling and pedestrian way between the Bronx and Manhattan. This is definitely a path I'd like to tackle. 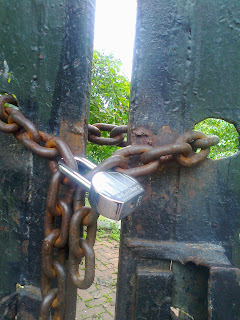 Posted by J The Travel Authority at 3:12 PM