A Little Bit of Portugal in New York City

It's not often that I step into a restaurant in New York City and find that after the first bite, I feel transported to another country. But that’s what happened to me the other night when I had dinner at a very recently renovated restaurant on the Lower East Side. 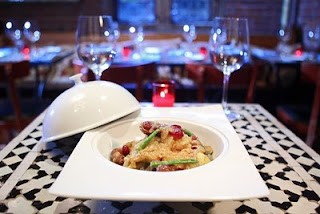 Nomad, a restaurant specializing in North African cuisine, still retains a North African theme with its murals, lamps, naturally-sculpted rose stone pieces and other embellishments. But now that it has Portuguese chef, Luisa Fernandes, as its executive chef, the restaurant has taken on a whole new life. 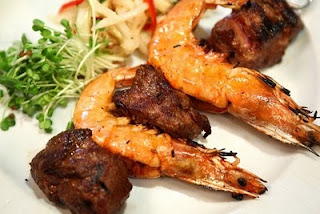 Luisa conjures up some magical Mediterranean fare that include elements from Spain, Italy, Greece, France, North Africa, and her native, Portugal. Portugal is one of my specialties and every dish that came out of the kitchen harkened back to my travels across that country. But each also had a little twist that made it approachable to the American palate. 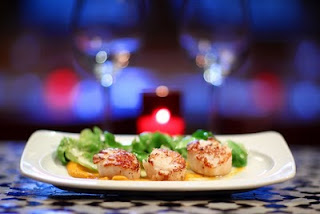 The fresh sardines came topped with pickled onions. Perfected grilled baby octopus was nestled in amongst chickpeas that were nicely flavored with bits of lamb sausage. A stuffed quail was dressed with a tangy pomegranate sauce and served with couscous, onions and raisins.

I ordered a balanced Trajadura wine from Monho, Portugal to accompany the meal. And I couldn’t get enough of the freshly-baked garlic and herb flatbread. (Many of the dishes are cooked in the brand new wood burning brick oven set into the wall in the dining room. And it’s the maple and cherry woods Luisa uses here that lend to the aromatic flavors.)

The interior of the restaurant couldn’t be more romantic, with flickering candles and a soon-to-open garden courtyard. 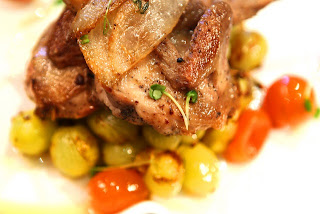 If you want to dine in a restaurant where the chef -- who, by the way, was the 2009 champion on the Food Network's cooking competition show, Chopped -- has a supreme passion for cooking, then I’d run right down to Nomad if you live in New York. And, if you don’t, I’d put it on my list of places to dine when you're next in town.

I don't know anything about this kind of food, but it sounds terrific ... and we LOVE watching the TV show Chopped!

I'm afraid the only Portuguese cuisine I've been able to experience is Peri-peri sauce. This looks divine.

Hi Roxanne, The food is most yummie, for sure. And I love Chopped too.

Hi Melanie, Yes, most people aren't that familiar with Portuguese cuisine. But this restaurant is a tasty introduction to it.

I recall seeing Luisa on Chopped.
I'm glad she has such a good place to share her skills and imagination.

Wow - those photos look mouthwateringly good! I'll have to check it out the next time I'm in NYC.

Sounds so good. I've had Moroccan food, but not North African. I liked that the eating style was communal. Looks like at this restaurant everyone had their own dishes.

I've been on a fresh sardines kick lately - will have to check it out!

I love Portuguese flavors. Sounds amazing and the photos are beautiful!

My favorite restaurants are ones where the atmosphere and food are so authentic that you feel like, when you step outside afterwards, you will be in Paris, Rome, Saigon... Portugal is one of my favorite countries and there seem to be NO Portuguese restaurants at all anywhere (why is that?) so this sounds like a find!

Hi Kerry, That's so cool that you saw Luisa on Chopped. I missed the entire season. But I'm thrilled to find such an amazing chef in a neighborhood that I frequent.

Hi Susan, And next time you're in NYC, email me so that we could maybe get together for a drink or something.

Hi Anonymous, The restaurant is not one that has communal plates. But there is still plenty of sharing going on so that you can taste a variety of dishes.

Hi Casey, I adore fresh sardines. Was also recently in the Netherlands where I also had them. Yummie.

Hi Christine, So glad you enjoyed the post and the photos.

Hi Melanie, I agree with you that it's hard to find Portuguese restaurants in many parts of the world, outside of Portugal. Though in the U.S. there are some Portuguese communities where the restaurants are ubiquitous. It's just everywhere else that you tend not to see the cuisine. Too bad because the dishes are way beyond, cod fish, which is what some people associate with Portuguese cuisine.

I'm always looking for new places to try in NY. I can't wait to try out this restaurant next time I'm in town.

Hi alisab, I'm sure you'll be in love with the restaurant and the cuisine. It was such a delight eating there.

This looks wonderful. My mom is full Portuguese, but I have yet to get to Portugal. I'm always surprised when I read about Portuguese food, because it's nothing like what my mom prepared. I think hers is more of a farm girl version of Portuguese food!

Oh! I wish I'd eaten here while I was in NYC.

Hi kris, If you ever decide to travel to Portugal, definitely let me know. I've got all kinds of advice, but I'm sure you mom does too. The chef at this restaurant actually is making very traditional Portuguese dishes, but with a Mediterranean twist at times. She did serve, for example, the traditional codfish croquettes.

Yet another reason I need to get myself back to the Big Apple -- and soon.

Good food + good travel = Best Travel Deals this is one of the perks in being in new places, the dining experience! wonderful shots, made me hungry seriously! :)

Mine is Thine said...

I've had dinner here many times and I must agree, the food is transporting. it's quite an exotic mix of flavors and spices...I'd say it's really a fusion of the Southern Mediterranean (think tagines, couscous, lamb dishes, cinnamon and saffron) by way of Spanish (the tapas dishes, and the Moorish influence in the dishes) and Portugal. See how complex that sentence was? That's the medley of different styles and tastes that come together with Chef Luisa's cooking!

Hi Cindy, I adore sardines and these were as good as those I've had prepared in Portugal.

Hi sarah, It's funny that I'd passed this restaurant many times and never knew it was there. There are just so many restaurants in the area, it's easy to miss. But I'm glad I finally stopped in. Hope you have a chance to enjoy dinner here next time you're in the city.

Hi Best Travel Deals, Thanks for your comments. Checking out new restaurants is always the way to learn about a place, even if it's my home town.

Hi Stephanie, Well, hopefully you'll be able to return to NYC and have time to stop at this restaurant. It's such a fab dining experience.