As a native New Yorker, it's hard to imagine living any other place in the U.S. What city could rival New York's vibrancy and creativity, its edginess as well as its sophistication? But one city that reminds me so much of New York but with the added plus that it comes with an amazingly beautiful waterfront promenade and a sandy beach to boot is Tel Aviv. Here you have a small city that's jam packed with creativity, liveliness, an incredible restaurant scene, notable architecture aplenty and art galleries and design emporia popping up all over the place. I just spent a week there, using it also as a base to visit other parts of the country. My first post from this trip is devoted to just a few of the cool Tel Aviv-based venues I visited: 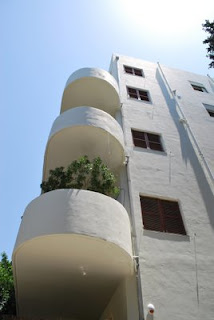 1. When I walked into La Champa, an intimate cava bar, I felt transported to Barcelona. Many of those packed into this small narrow bar were dancing to the live Spanish music played by an Israeli band -- plenty were enjoying the vibe outside as well. I stood at the bar -- as everyone does; there's no sitting here -- and sipped a wonderful glass of cava (they serve nine different kinds) while nibbling on patatas bravas, chorizo and manchego. When I left near 1 a.m., things were still going strong.

2. The city's love affair with Spain is apparent in the recently-opened restaurant appropriately named Pintxos. (It's the Basque spelling of a word referring to small one-bite tapas.) They offer 15 different varieties on a tray -- you pick what you want as the waitress passes your table -- and I gobbled up 10 of these. I couldn't resist the white truffle spread on bread, Danish blue cheese with grapes, and artichoke with truffle oil and cashew nuts.

3. If an architect didn't tell me about one-year-old Salon, I wouldn't have found out about this gem. After all, they don't advertise, there's no web site and don't expect anyone to hand you their business card because they don't have one. This is a word of mouth establishment on the edge of Tel Aviv that's only open on Wednesday and Thursday nights. I showed up at 10 pm on a Wednesday -- the more "laid back" of the two nights, though it's never laid back -- and sat at the bar. (That's where all the action is. You're only steps away from the chef who's preparing food on the bar top that's stacked with all manner of fresh ingredients, from black tomatoes to Arab almonds.) Everything, from the ultrathin raviolis to the flavorful focaccia is handmade. And though eggplant and radishes never have thrilled me, they became my favorite foods, at least the way they were prepared here. I chose the six-course tasting menu where I found out the chef's love of tomatoes of all sorts. 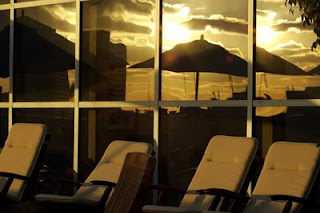 4. Film buff that I am, Hotel Cinema couldn't be a better locale to lay my head. Centrally located off of Dizengoff Square, this boutique accommodation is housed in the original Bauhaus-style movie theater that opened in the 1930s. Every floor has plenty of the theater artifacts to explore, whether it's film projectors, old movie posters or cinema tickets. They even provided a small carton of popcorn at check-in.

5. Open less than a year, the Hotel Montefiore is a boutique affair that's become a happening place. Housed in a building dating from the early 1920s, the 12-room hotel couldn't have a better location near tree-lined Rothchild Boulevard -- my favorite strolling street in Tel Aviv. Expect to be catered to here -- they'll arrange everything from having a fitness trainer or masseuse come to your room to setting up private guided tours. My next posting will discuss my dining experience in their restaurant. 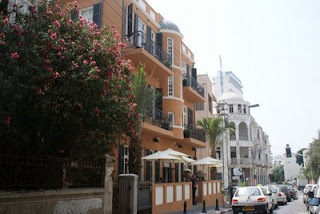 Posted by J The Travel Authority at 7:11 PM

Tel Aviv sounds amazing, Jeanine. It seems to be in perfect balance despite all the difficulties in the Middle East. It is nice to get a perspective on life in Israel outside of what we see in the news. Thanks!

Glad you stopped by to comment, Authentic Seacoast Resorts. Yes, so many savvy travelers have no idea about all the cool things going on in Tel Aviv. As you know, I enjoy writing about hidden treasures like these.

Israel has never been on my list of places to visit, but you have made it sound as wonderful as many other cosmopolitan cities. It's nice to get a different perspective on this area. You've definitely made me more interested in visiting!

Hi Martha, Yes, many of my friends and colleagues have felt the same as you do. It's not on their top 10 list. But on my travels, I try to look beyond the preconceived ideas people have of a region.

I visited Israel 10 years ago with my son and your post reminds me of how much I enjoyed Tel Aviv. It's such a surprise to visit this ancient country and to find out how modern and vibrant it is. Well done.
http://www.geezersisters.com/

Hi Ruth, Thanks so much. Glad you enjoyed my post. Yes, I found so many treasures down many a street in Tel Aviv. Wish I had more time. But I'll surely return.

Welcome back, Jeanne. Glad to get an update on Tel Aviv. I just happened to blog about Israel while you were gone at A Traveler's Library.

cool. makes me want to go!

really like the range of not so usual places you tell of. and I have to ask, did you hear any great music while there?

Hi Kerry, Thanks for the comments. I heard this really great Israeli band that played spanish music at La Champa, as I mentioned. Then I went to some parties and clubs along the Old Port where there was fun dance music. But didn't have time at night for anything else. Tried to pack alot into a little bit of time. Need to return and do more.

Awesome post, I love Israel and really can't wait to get back there.