A Center of Iceland's Elf Activity 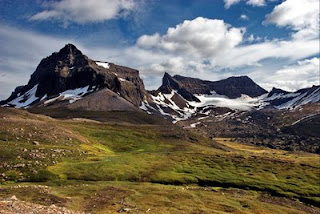 Half the fun of the East Fjords is getting there. Traveling with a guide from FA Travel, we drove on roads that wind through a desolate land where the marshes are riddled with bird watching possibilities, from loons to swans. At one point, we passed a curious solar- and wind-powered vending machine housed in a tiny green hut beside a covered picnic table. Before the road dropped to the sea, a prominent cross rose from beside the road, indicating the location where, in the 1300s, a local successfully battled Naddi, a half man, half beast who lived in the scree slope. All is certainly curious on the way to Borgarfjordur Eystris, which is said to be home to the largest number of elves and hidden people in Iceland.

Some of the best hikes in the country can be found in this area where trails course across deserted inlets to green valleys studded with turquoise lakes bordered by snow-crowned peaks and mountains streaked with pink and ochre colors from rhyolite rocks. The geological features are firmly rooted in the local lore. The king of the elves is said to live in the picturesque Door Mountains. On the outskirts of the town of Bakkagerdi, a rounded hill is supposed to be the dwelling place of the queen of the elves. A short drive away is Hafnarholmi, an islet with thousands of puffins.

Each day our biggest choice was deciding which hiking trail to tackle. One climbed to Brunavik, a quiet cove with a black sand beach and plenty of wildflowers on the way. Another meandered to Storurd, which literally means "big scree." This path led to a boulder-ridden meadow with a teal green glacial lake, perfect for a picnic. I dipped my feet into the icy waters, only for a moment and gazed at the calm waters in this peaceful setting where we didn't run into another hiker the rest of the day.

Posted by J The Travel Authority at 12:20 AM

I loved Iceland when we visited. The weirdest site was a car rally, made up of 50's large American cars going off road past Thingvellir

Hi Sarah, That's a totally strange site, especially given the pristine landscape of Thingvellir. Glad you had an amazing time in Iceland -- how could you not.