A Curious Doll For Curious Times

Everything I create is a little bit different from the tried-and-true. And my AngryJ doll is no exception. AngryJ is an especially timely plush doll for the times we live in now. The media is rife with angry goings-on, whether it's news stories that are far afield or on our home turf. Every day, we may be inundated with frustrations that push our anger button. So, I created AngryJ as a way to you to realize that she looks like how you feel as you stew in your own angry ruminations. Just look at her and perhaps, even for a moment, she'll make you laugh and you'll get pulled out of your negative emotions.

AngryJ has a curious history, since I created a sketch of her when I was an angry 10-year-old kid. And many decades later, she became a doll. (I'm very persistent and I continued drawing her my whole life.) Now I'm including her backstory on a tag (below) that's attached to one of her skinny little arms. (She's looking to be adopted.)

Interestingly, I've found that more adults love AngryJ than kids. But anyone can buy AngryJ here. Each is a little different because they are handmade in the U.S. But, though all different, they are all very angry! 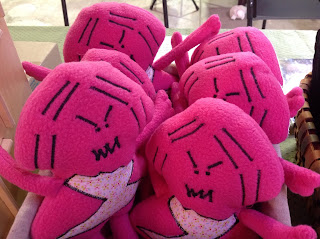 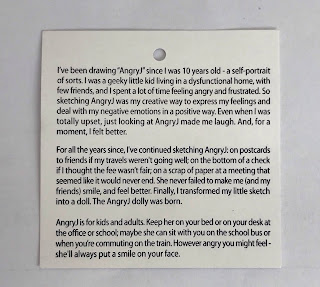 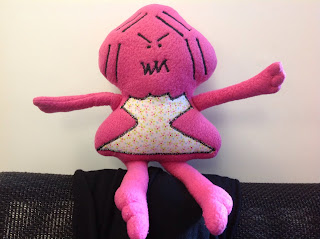 Posted by J The Travel Authority at 10:15 AM