Curious Plants + Animals While Cruising Along the Amazon

Since I'm a biologist by training and a supreme tree hugger, my idea of an ideal cruise may be a little different from most. Sure, I look for creative cuisine; comfy cabins; fine wines; a friendly and experienced staff; and small ports where I'll meet villagers in their homes or schools.  But an eco component is key, where I'll have close encounters with an abundance of creatures, plant and animal alike, in their natural habitats. My recent journey up the Amazon River (along the Ucayali and Maranon rivers in Peru) with International Expeditions fulfilled that desire with an abundance of encounters.

But this wasn't simply about gaping at the flora and fauna. Luckily, aboard their brand new, gem of a riverboat, La Estrella Amazonica, I was able to interact daily with native-Peruvian Johnny, who is the embodiment of a Renaissance guide. He's a unique combination of naturalist, teacher, comedian, entertainer, musician, and cultural interpreter for all things in the Amazon. With all that in mind, we learned not just how to identify each plant, bird, fish, reptile, amphibian and mammal, but also its adaptations, properties and the impact on the villagers. Given that Johnny's generosity with his time and knowledge and empathy to the needs of others is so palpable, and his knowledge and love of the Amazon so strong, we all came away falling in love with the inhabitants of the Amazon River Basin and understanding why it's vital to protect it at all costs.

This is just a small sampling of my close encounters: 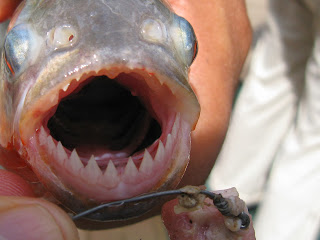 The Amazon is not chock full of these carnivorous fish. Rather, we pulled up in our skiff along a section that's shaded and coated with a lot of floating debris and vegetation. This is where we pulled in and baited each line with a chunk of raw beef. Churn up the water a bit with the tip of the rod, drop the line three inches down and wait. Except you don't have to wait that long. Within a few seconds, I felt a tug, set the hook and pulled it by yanking the rod up. The biggest we caught that morning was 10 inches. The crew expertly held the fish behind the gills and carefully pulled off the hook. That night we feasted on grilled piranha. The sweet, white meat is found just under the dorsal fin. Yum. 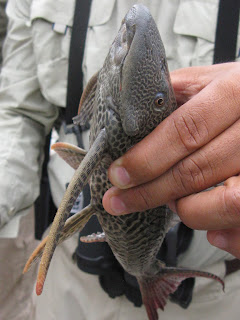 The armored or walking catfish has elongated pectoral fins allowing them to walk up and along the muddy shore. There, the male catfish digs holes with its sucker-like mouth so that the female can deposit her eggs. It's given the name armored because its body is covered by a bony layer. This is another good tasting fish. 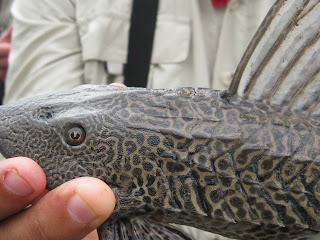 We didn't catch this fish but, rather, pulled up to a fisherman in a dug-out canoe. He was gracious enough to allow us to touch and photograph his catch. (He had a boat full of fish that he was bringing home to his family in a nearby village.) 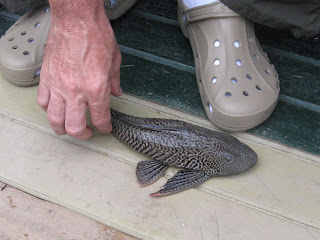 Related to a tarantula, this is a bird-eating spider which first kills a lizard and takes over its burrow. Then the spider sits in wait at the entrance until a small bird prances by. They use venom to paralyze the victim. 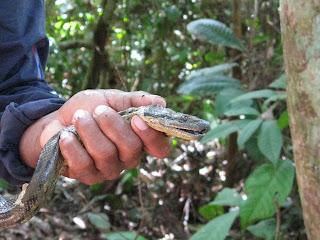 This small anaconda didn't stray far from a creek, the environment it much prefers.  A mere five inches long, this juvenile -- it's just two years old -- could reach 36 inches in length. Anacondas tackle their prey not with venom but by constricting them under water. They're so aggressive that they can consume a caimon, a large reptile in the same family as the alligator, or a capybara, a large rodent that can weigh up to 145 pounds. 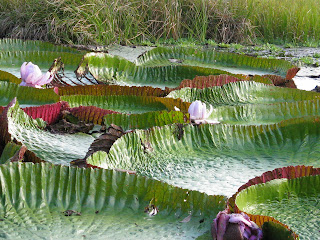 These giant water lilies can only be found in still, shallow water. Here, we walked along a plank beside a small pond. Notice how the edge of each plant curves up to prevent water from entering the surface, where organisms would end up decomposing it. Interestingly, the under surface of each leaf is covered by long spines to prevent fish from eating it. Those lovely pink blossoms produce a noxious odor that attracts beetles that are part of the pollination process. 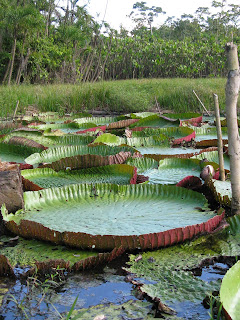 How sturdy are these giant leaves?  They can hold the weight of a three-month-old baby. Who knew? 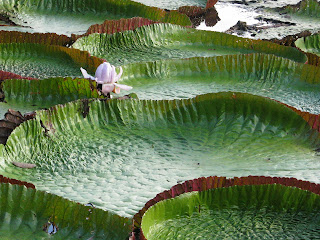 Posted by J The Travel Authority at 12:27 PM

Hi Rebecca, It certainly was a new experience. Who knew you could even eat piranha? And that they could be tasty, too?

Oh, dear. I've never seen a catfish like that. Neat!

How fascinating - all of these - but especially the spider! It's incredible how such a small creature can eat much, much larger ones. Scary-looking, too!

I really enjoy vicarious traveling through your blog!

Amazing wildlife ... but those leaves/plants - whoa!

Hi Sheryl, Even this little anacanda can eat creatures many times its size.

Hi Alexandra, Thanks so very much. I love your blog, too. I always learn something new.

Hi merr, It's amazing how even the plants have crazy adaptations. These water lilies look so innocent and then you see their immense thorns underneath. Who knew?