Luxury in Atlantic City Without Breaking The Bank

How did a non-gambler like myself -- well, not exactly non-gambler; I do play craps every once in awhile -- who thrives on nature end up staying in (and enjoying!) Atlantic City, New Jersey? After all, I was seeking out a budget destination with peace and quiet where I could sit in a sun-filled environ -- a perfect ambiance for me to finish writing Act 1 of my second feature-length script.

I set some difficult-to-fulfill criteria: I needed a four-night getaway that was close to New York City and accessible by bus or train. The accommodations couldn't cost more than $100 a night. There should be an array of restaurants with cuisine that would satisfy the foodie in me but with menus that also fit a budget-minded trip. And, because, I'm not like writers who gravitate to dark, brooking enclaves, I needed an abundance of natural light and venues that provided access to botanical views. The Borgata and the Water Club at the Borgata to the rescue. These connected properties fit all my criteria. So much so that I'm hoping to return in a couple of months to work on Act 2. 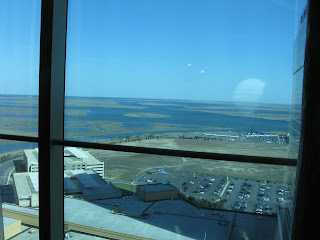 I didn't want to battle traffic and deal with parking fees by driving to Atlantic City. So instead, I took the bus and spent a relaxing 2.5 hours reading the Sunday New York Times. The Greyhound Lucky Streak buses run almost every hour or so (depending on the time of the day and whether it's a weekend or weekday departure) directly from New York City's Port Authority to several different Atlantic City casinos, including Bally's or the Trump Taj Mahal. (The round-trip ticket is a mere $35.) Supposedly the buses are equipped with WiFi, but my buses were not equipped with it. 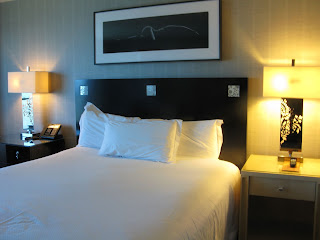 Once we arrived, rather than hopping in an expensive taxi for the short, 20 minute ride to the Borgata and The Water Club at the Borgata, we jumped in the Atlantic City Jitney - the fare is a mere $2.25. (The Route 2 or Route 3 Jitney serves the Borgata.) Sure, it makes a multitude of stops, but it's still better than the $15+ for the cab.

Both the Borgata and the Water Club have midweek specials (not during high season, of course) that hover around $99. And for this highly inexpensive price, we had a spacious contemporary room with massive windows overlooking the nearby marina as well as the adjacent protected salt marshes that is along a bird migratory path. (You're probably wondering could this really be Atlantic City?)

One of the highlights of a stay at the Borgata or The Water Club is the Borgata's Spa Toccare along with the adjacent health club, the Pump Room. We plunked down $40 a day and had full access to the spa facilities as well as the health club. (The gym by itself is $12 a day.) It's easy to spend the entire morning or afternoon here luxuriating in the various hot tubs, sauna and steam bath. The lighting is subdued as I snuggled in a thick robe, sipped a fresh juice, nibbled on Granny Smith apples and lounged about. (A perfect de-stresser before starting work on my script each day.) The health club, that stocked copies of the New York Times as well as bracing cold towels, was relaxed and hardly crowded. Among the multitude of machines, the one that became my favorite, the Wave by TechnoGym,  simulates a skating action, whether on roller blades or Nordic skis. I was told that no one ever uses it so I always had it to myself. 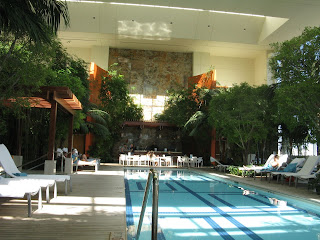 I spent every day at the Water Club's heated indoor pool (actually pools) since, in a sun-saturated room that looks out to a foliage-laden garden, there is the main heated pool as well as a smaller infinity, plunge pool and a couple of hot tubs. This was my "office" over three days where I settled in on one of the chaise lounges for hours with my laptop. No one under 18 is allowed in the pool area -- it's only available to Water Club guests -- so the quiet atmosphere was conducive to hours of creativity. 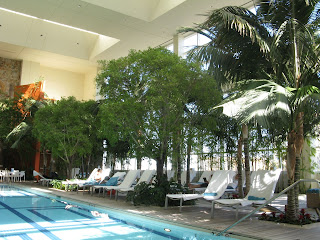 My only break during the day was for lunch where I ordered from the poolside service: the Mediterranean platter (with humus, baba ganoush, tabouleh and pita), or the tuna salad (made with olive oil rather than loaded with mayonnaise, plus red onions, anchovies and roasted peppers) and a glass of Gramona Cava from Spain. (These were splurge options since the salads ran $17 to $20 and the wine another $13.) The food is all prepared in the nearby Sunroom, an appropriately named bar/restaurant that resembles a greenhouse with plants, including bamboo, draped in clusters, and a wall of cascading water. And, given that celebrity chef Geoffrey Zakarian is the culinary consultant, it's no wonder the menu is highly focused on modern American cuisine. When I was seeking a low-key spot to hang out at night, I also chose to sip a glass of wine at the Sunroom beside a blazing fireplace. 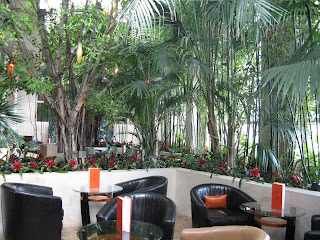 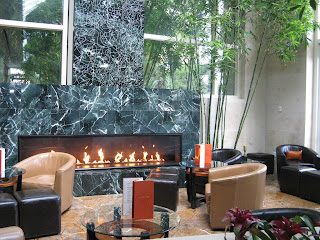 Another tasty lunch option is Roma, a casual Italian spot serving thin-crust individual pizzas ($13 plus extra for additional toppings), such as the San Remo with anchovies, mozzarella, olives and arugula.

My breakfast choice was The Metropolitan. Though the prices are not cheap by any means – oatmeal is more than $6 and pancakes are $9 -- I found that the huevos rancheros ($11) were well worth it. They were filling, the salsa provided the right balance of heat and the easy-over eggs were not overcooked, making this the one of the best huevos rancheros dishes I've ever eaten. (I just had them go light on the monterey jack.)

For dinner, each night I found a different budget-minded menu at myriad restaurants. But, when I think about eating on a budget, upscale dining hardly comes to mind. But, at the Borgata,  it's de rigueur.

SeaBlue –  As part of their Social Hour, every Sunday night a half-price menu is in effect until 7:00pm. The setting, with its blue palette including a blue-hued marble bar, conveys an ocean motif. Among the items on the Michael Mina-designed bar menu are the fritto misto with shrimp, calamari, snapper and smelt; and deviled eggs with white anchovies and shallots.

Izakaya – Every item at this contemporary Japanese eatery is just $7 all night on Mondays. Among the most well-crafted dishes are the duck meatballs with foie gras, terikayki skewers atop soba noodles, and crispy chicken bao bun with mint and shallots. Don't miss the dessert: a rich trio of milk shakes with smores.

N.O.W (aka Noodles of the World) – Tuesday is a good night to dine at this Asian-focused restaurant that's a bit hard to find. (It's on the casino floor adjacent to the Asian gaming table gaming area.) Most of the dishes, including the broth noodles and creations from the wok, are under $15. Two of us shared the Kyoto Udon which consists of udon noodles with shrimp, chicken and roast pork; and the Hong Kong shrimp wanton that's accompanied by egg noodles and shrimp dumplings. The seating options are at the sushi bar or at long communal tables.

Fornelleto – During Wine Down Wednesdays, this upscale Italian restaurant offers small plates and Napolitana pizzas for just $10. Even the paired wines – and their selection is extensive – starts at $10. Popcorn shrimp with  spicy aioli, grilled beef sliders topped with gorgonzola cheese and dried tomatoes, and an oyster mushroom pizza sprinkled with goat cheese are some of their flavorful options.

Among the many surprises I discovered during my stay was a lovely pedestrian walkway that's saturated with the sounds of nature. It extends some two miles from the back of the Borgata to Harrah's and then on to the Golden Nugget. Interestingly, I found that few people who knew anyting about this path which hugs a protected salt marsh that's along a migratory bird path. All along the trail, which is lighted at night, are benches and placards documenting the many birds and other natural phenomena that can be viewed along the way. It's not unusual to spy peregrin falcons, brants and other birds. For the most bird sightings and sounds, walk, jog or bike this path early in the morning.

Posted by J The Travel Authority at 1:40 AM


The villas in this post are so great. That kind of place is the place where I want to go old and live peacefully. Your blog provided us valuable information to work on. You have done a marvelous job!

I visited Atlantic City 40 years ago and it was nothing like this. Sounds like you had quite a time! Looking forward to hearing more about your sceenplay.

I never thought of Atlantic City as a "getaway" destination, but it sounds like it served you very well.

Hi Alexandra, I was pleasantly surprised, as you can see from my post, with how Atlantic City is a great getaway destination for the entire family, actually.

Hi Living Large, Funny you bring that up because I just responded to Alexandra that it's become a getaway destination. Though so many people still don't see it that way.

Never would have associated Atlantic City with relaxation and writing, but you've got me thoroughly convinced! I've been to both venues and never looked at them quite this way.

But did you get your writing done?
The places you mentioned sound heavenly and I would be very distracted by all of them.

Hi Heather, I absolutely finished Act 1 of my script, which was my goal for this getaway. I'm a writer who doesn't like writing in a room alone. I thrive on distractions.

Hi Sheryl, Maybe I've got a weird view of great venues for writing. But they all revolve around tons of natural light, water (whether a pool, lake or ocean) and access to yummy food.

Hi, I'm Giulia and I work in the web department of Technogym. To learn more on entertaining and fulfilling experience provided by Technogym solutions for hotels and Spas, take a look at this page: http://www.technogym.com/gb/solutions/hotels-and-spas/hotels-spas/3092

Thanks for showing me another side of Atlantic City. Who knew there was such beauty and peacefulness?

Sounds like a wonderful work-ation. Was internet access free? If so, sounds like quite a bargain too~
GIven the rates and the weather, you chose a perfect time of year, too!

OOOH, maybe I need a writing get away. Oh, who am I kidding ... I just need a getaway. Sounds terrific.

I'm never been to AC! But your description sure makes it sound like a place I might want to visit sometime.

I'm amazed you got your writing done with all the distractions on hand.

That does look luxurious. I think I would have spent my time in the heated pool too

So lovely. After watching Boardwalk Empire, I have a yearning to check out Atlantic City. I'd love to stay in a hotel where all the vintage decor was still in place.

Hi Donna, Yeah, I was pretty surprised, too.

Hi merr, I haven't been to Atlantic City is ages. It's really changed for the better.

Hi sarah, I actually write better in an environment laden with distractions. I could never get work done in a library. Way too quiet for me.

Hi MyKidsEatSquid, It certainly was tempting to stay in the spa and gym for hours. But, given my workload, that wasn't going to work.

Hi Jane, Boardwalk Empire was another one of HBO's great series.