Tips for 24 Hours in Brussels

Sometimes when I'm traveling, I only have one day to spend in a large city. That's what happened recently on my trip to Brussels. And yet, I often have an amazing ability to pack in as much as possible into a single day by having the day's itinerary plotted out precisely the night before, both on a map -- with everything color coded for the time different venues open -- and in my notebook where I note the best way to get everywhere, including metro, bus, walking or taxi. Yes, it's all very organized but that's what happens when you only have a day to see Brussels. Here's what I managed to fit into 10 hours:

1. Place du Petit Sablon -- a petite neo-Renaissance-style park with bronze statuary, wrought iron balustrades and plenty of ivy. It's worth sitting on one of the benches listening to the tinkling water. You'll feel far from the traffic, though it's literally as the park's doorstep. 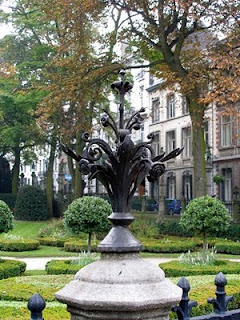 2. Sculpture Garden of the Fine Arts Museum -- it's curious that only school groups seem to visit this tiny strip of verdancy that's literally adjacent to one of Brussels' most prominent museums. This garden sits on the site of the city's first botanical garden from the 18th century. I walked along the thin path under locust, linden, maple and plane trees, checking out the statuary that all have a female theme. (One of the works is "Bathing Beauty" by A. Maillot.) 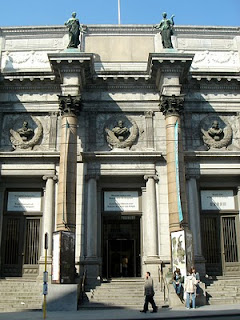 3. The Belvue Museum isn't far away, but clearly I didn't have time to visit. What I did check out is the museum's lovely outdoor terrace where you can sit amongst the shrubbery and sip a fruit juice under an umbrella.

4. Across the street is yet another green space -- Brussels is chock a block full of leafy swaths -- called Brussels Park. But instead of joining the school groups along the main paths, I found a series of tiny gates leading to small pockets of forestland. Not a sole could be bound in these shady retreats.

5. The Magritte Museum deserves a full day, or at least the entire morning, to adequately explore the works of one of my favorite surrealists. Everything is arranged chronologically. But during my brief visit, I'd have to say that among my favorite works are the series of paintings titled The Dominion of Light.

6. I also could've spent most of the day in the Musical Instruments Museum but that couldn't happen either. Instead, I checked out a few exhibits but found this place quite addictive. Once you don the infrared headphones, all you have to do is stand in front of a display and you'll automatically hear the sounds of that instrument. The museum's collection is one of the largest in the world and includes both antique and contemporary exhibits. Just think: they've got 58 different types of wind instruments.

7. On the top of this gorgeous Art Nouveau building is Restaurant du MIM. This is a low-key eatery with one of the most expansive views around. The gazpacho soup with salad is an inexpensive, hearty and tasty choice.

8. I'm a very big fan of contemporary art so I didn't want to miss visiting the Xavier Hufkens Gallery
where in the white-on-white interior I explored the fantastical works of David Altmejd, a Canadian artist who puts together disparate objects. In his most recent exhibit, multicolored thread formed a dragon-like creature sitting in a plexiglass cube as well as the heart and liver of a plexiglass human.

9. You can't leave Brussels without visiting the Comic Strip Centre where I found it hard to pull myself away from a special exhibit on Tove Jansson, the creator of The Mommins. These curious little creatures that occupy numerous comic strips and books are plenty eccentric. But even if these odd forest-dwelling characters -- many that resemble white hippos -- don't interest you, the prestigious collection of comic strips will.

10. I had some difficulty getting the taxi to figure out where Parc d'Egmont was located. That's because you can only access this small park via three narrow alleys. But once inside, I found I had the place almost to myself with just a few locals wandering the paths, past a bronze of Peter Pan and the neo-classical orangery where they serve lunch and brunch of the weekends.

11. L'Atelier Yves Mattagne is a perfect place for dinner though not relaxing in the true sense of the word. That's because it's a combination cooking class and dining experience. Everyone is broken up into groups and set to work at one of four stations to dish out the dinner menu for the evening. Because I love being active, this was a perfect way to end a very frenetic day. Using the executive chef's menu -- and it changes from night to night, though we worked with Belgian cuisine -- we sliced potatoes, diced leeks, whipped cream, whisked in truffle oil and topped the chocolate tarts with raspberries.

Posted by J The Travel Authority at 8:31 PM

I'm exhausted just reading this list, but you definitely show that a single day can be enough to see a lot of a city.

I am so so jealous you got to see the Magritte Museum! Someday, I will get out there myself. Until then, I live vicariously through you.

Sounds like you had a great day. We've been known to have whirlwind days like this as well. I tend to want to pack in as much as I can on vacation.

I am jealous! This sounds like a fabulous trip. Thanks for sharing!

Hi Frugal Kiwi,Yes, I kinda have a reputation for being able to totally pack as much as possible into a single day in a city. It's not what I'd prefer to do. If I could've arranged it, I would've loved to have had at least several days in Brussels.

Hi Stephanie, I'm glad you're a fan of Magritte as well. I told several friends how much I love his work only to find out they couldn't stand surrealist art. Oh well.

Hi marthaandme, Yes, Brussels is such a lovely city with so much to offer. It's good to know that I'm not the only one who has and enjoys these whirlwind jaunts.

Hi Susan, Thanks so much for visiting. If you ever decide to visit Brussels, I hope this post will help you. But hopefully you can spread out visiting these fun sites over several days, unlike me.

Talk about productivity. What an incredible day you were able to make of your short stop. I bet it was a ton of fun seeing what you could make of it!

Hi Name Tags, Yes, it's certainly "Type A" of me to pack so much into one day. But it sure was fun!

I've been known to take in such quick trips as well. On this one, I think I'd have been waylaid by the musical isntruments museum, though. Cooking class sound interesting too. Thanks for sharing your day.

hi kerry, I totally agree with you. The Musical Instrument Museum was oh, so tempting. I could've easily have been waylaid. But had to keep to the schedule. It's a must re-visit, for sure.

When I travel, I'm not much for true sight seeing. I just like to walk around, people watch and eat. But the music museaum sounds awesome.

Hi Alisa, There was a colleague who traveled with me (but we parted at breakfast every day and didn't meet up until dinner) and he thought my activity level was way too frenetic for him. He also preferred to observe the street scene. It's also a great way to enjoy a city.

Mmmm, I'm wondering if I could get you to do the color-coded map thing for me, since I have two days in Brugges and two in Amsterdam (which sounds down-right relaxed after reading your day in Brussels.)

Hi Vera Marie, I could definitely help you with both Bruges and Amsterdam. I just returned from both cities as well and had whirlwind itineraries in both. Let me know.

Brussels is one part of Europe I've never visited but I've always wanted to--I'm amazed how much you were able to see/do in 24 hours.

Hi Kristen, I actually have a reputation as a travel writer who can visit an amazing number of venues in just one day. Even one of my editors was shocked when I told her the number of places I visited in Reykjavik. She wondered how many days it took and when I said, that was just one day's itinerary, she was speechless.

I'm so impressed by your ability to plan and approach such limited time in a city with such organization! Thank you for sharing your experience in Brussels -- and how you managed to see so much in one day.

Hi Jesaka, Thanks so much for visiting and for your comments. Organization is the key when you've got only a tiny bit of time in a city. But I'm actually fairly organized most of the time anyway. It's the "type A" in me. :-)

I can't help it, Your blog is great, would you like to come and party with us at the World Wide Travel Blog Party, don't forget to invite more of your blogger friends along. Definitely the more the merrier! See you there and Kudos to you! :)

it seems so clean and peaceful there

Hi Best Travel Deals, Glad you enjoyed the post. And thanks for the heads up on the WW Travel Blog Pary.

Hi El Cid Vacation, Well, I don't know if I'd say that Brussels is exactly a quiet urban center. It's pretty vibrant and expansive but the green spaces are certainly peaceful and lush.