You have to give it to those Romans -- they certainly knew how to pick their vacation spots. The Alentejo region in Portugal was considered their favorite. Just an hour from Lisbon, the region has plenty to satisfy my love of everything medieval. But the roads snaking through this region are to be enjoyed as well: rolling and twisting ribbons that wind past lush olive groves, well-tended vineyards and gnarled cork oak groves. Atop the hilltops, I spied many a fortified whitewashed village to explore.

The Alentejo region, Portugal's largest, has never seen the kind of tourist traffic that flocks to the Algarve or other regions. I've visited the Alentejo many times and have written about it in the print media over the past several years. But now we're seeing an increased interest in the Alentejo with features appearing recently in the New York Times and the Boston Globe.

Here I'll take you to some of my favorite spots in this region that I hope will remain relatively unspoiled:

1. In Castelo de Vide, I wandered the narrow streets that are lined with colorful blooming flowers and discovered the old Jewish Quarter with the oldest synagogue in the country.

2. A former Knights Templar fortress provides spectacular views of the countryside from the 13th century keep in Monsaraz. Here, I walked the schist-lined street flanked by centuries old houses to the Sacred Art Museum to view a lovely 15th century fresco. 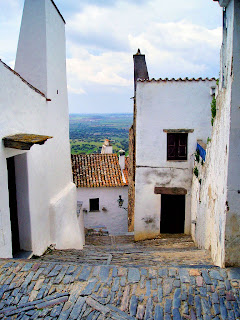 3. The walled city of Evora, a UNESCO World Heritage Site, has something for everyone, from foodies to history buffs. Some of the most striking sights include a 16th century aqueduct and a Roman temple that has survived, and my favorite: the macabre Capela dos Ossos, a chapel that's entirely constructed from ceiling to floor of human bones. (An appropriate venue to meditate on the frailty of life.) 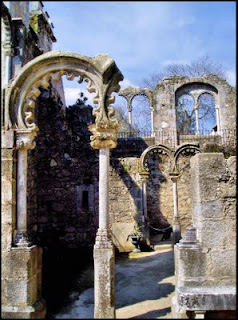 4. Marvao has one of the best preserved castles in the country where I wandered the battlements, towers and vast courtyards. 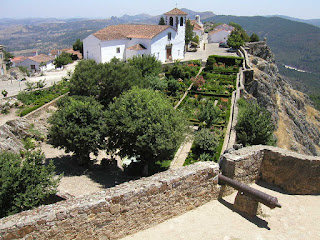 5. It's easy to spend the entire day in Serpa that's noted for its array of museums. The Watch Museum displays more than 1,000 time pieces, an Ethnographic Museum provides exhibits of equipment used in regional occupations, from shoemakers to blacksmiths, and the Archeological Museum has artifacts that date to the Stone Age. Serpa is also well known for its cheese production. In fact, I visited several artisanal producers and tasted the queijao de Serpa.

Who knew there was a watch museum? Very cool.

Hi Vera, Thanks bunches for your comments. Glad you enjoyed the post.

Hi marthaandme, I certainly didn't expect to find a watch museum in this town. And I love watches so exploring the different models was a lot fun.

You've been everywhere and write about it so beautifully. Portugal is one place I haven't been -- on the top of must must-see list.

Hi Ruth, I'm glad you think I've been everywhere. I have tons of countries/cities on my list of places to go. But Portugal is one of my very favorites.

Jeanine, You are so very fortunate to travel to such beautiful places - and I love the fact that you uncover things that people might not have known about. I've never been to Portugal, and would very much like to visit. Thanks for the beautiful photos, too!

As I just read The Pillar of Fire and The World Without End, I'm especially interested in mediaeval towns at the moment. Fabulous.

Hi Frugal Kiwi, I'm so glad you share my love of medieval villages. Each has a unique but definitely other-worldly quality that I adore.

I love your posts! I've never been to any of these places, but you really make me want to go.

Hi Stephanie, Thanks for taking the time to comment. I'm glad you've been enjoying my posts. And I hope they can help you plan your next trip.

Wow. You always cover countries I haven't considered visiting--but now I want to. I would never have thought of Portugal as this picturesque.